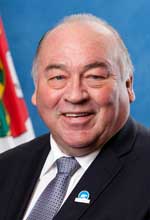 The Northwest Territories (NWT) has all the ingredients for strong economic growth, including abundant natural resources, and significant participation and support for economic development from Indigenous-owned businesses and governments, but we can't capitalize on these advantages without a plan.

While other Arctic nations are proceeding with ambitious plans for social and economic development of their northern regions, there is no similar vision for Canada. More than two years into its mandate, the federal government has yet to establish a clear policy to guide decision making and investment in the north.

NWT Premier Bob McLeod has called for a national discussion on how all Canadians can join with the territorial and federal governments to create a plan for developing the north through clear priorities and solid investments in new and existing sectors with significant potential for sustainable growth. Businesses across the country stand to benefit, and need to be part of that conversation.

Bob McLeod is the first two-term Premier of the Northwest Territories and has served on Cabinet in all three of his terms as a Member of the Legislative Assembly, representing the constituency of Yellowknife South. He is a Métis person, born and raised in the predominantly Indigenous community of Fort Providence, NWT. Before entering politics, Premier McLeod had a distinguished career as a public servant, including senior appointments with the Government of Canada and Government of the Northwest Territories. His previous portfolios have included Industry, Tourism and Investment; Public Utilities Board; New Energy Initiatives; and Lead Minister for the Mackenzie Gas Project. He has also been active in conservation, including serving as co-chair of the Northern River Basin study and chair of the Mackenzie River Basin Committee, as well as vice president of the Fur Institute of Canada and chair of the Canadian Wildlife Coalition.