If you are registered for this event but did not receive and email with the event link, please email or call 604-640-5495

We are pleased to announce that the previously postponed 2020 Governors' Banquet & Rix Awards will be held virtually on Wednesday, April 7, 2021.

Normally a black-tie affair that would bring together business, government, and community leaders to enjoy an evening banquet is being reimagined for the virtual gathering and will now be called Governors' Gala and Rix Awards.

Although things will be different you can still expect an exciting evening of entertainment and much more.

Inductees into the Council of Governors 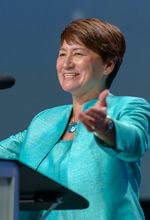 2019-20 Chair, Greater Vancouver Board of Trade 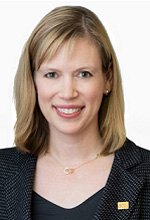 2018-19 Chair, Greater Vancouver Board of Trade 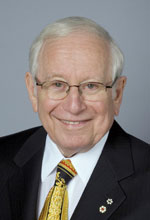 Joe Segal's story is anything but typical. Born in Vegreville, Alberta in 1925, his early years included losing his father at aged 14, stretches of financial hardship and hard labour building the Alaska Highway. He fought in the infantry in World War II where, along with his compatriots, the Calgary Highlanders, he participated directly in the liberation of the Netherlands.

Following the war, he arrived in Vancouver and with $1,500 in his pocket and set to work on more entrepreneurial pursuits. While he started small in war surplus goods, his hard work and tenacity lead him to found the Fields department stores and, ultimately, take over Zellers before launching Kingswood Capital Corporation - a conglomerate with interests in real estate, manufacturing and financing.

Despite his success, Segal has remained firmly grounded in the community where he built his businesses and raised his family. It is a tribute to his character that his impact and life in the city are perhaps most marked by his generosity - both with his time, as a mentor, and philanthropic endeavours.

A recipient of both an Order of Canada and an Order of British Columbia, Joe Segal's more recent years have been defined mainly by his philanthropy.

He served on the board and as Chancellor of Simon Fraser University (SFU) for six years. And, in perhaps one of his most visible contributions in Vancouver, Segal donated the historic Bank of Montreal building at 750 Hastings Street to SFU, creating a home for the Segal Graduate School of Business.

In 2010, he and his wife Rosalie donated $12 million to the VGH and UBC Hospital Foundations to create the Joseph and Rosalie Segal and Family Centre, a 100-private-room acute care centre serving the mental health needs of people in crisis. The substantial gift, made prior to mental health concerns being mainstream, is just another demonstration of his strong connection to the needs of the community. There are countless other organizations who are recipients of the Segal's work and philanthropy.

Together with his partner Rosalie, the Segals have passed along the philanthropic genes to their children Sandra, Tracey, Gary, and Lorne. The Segal family has supported mental health charities for more than 20 years. Their awareness was sparked after they were invited to attend Coast Mental Health's Courage to Come Back Awards, which honour individuals who have overcome major life challenges. The event has been chaired by their son, Lorne, O.B.C., LL.D (Hon), for the past 15 years.

In a complex world, Joe Segal's life offers a clear example for leaders today and the leaders of tomorrow. Simply put, a life well-lived will be most marked by the ways in which we give back to our community and contribute collectively towards a brighter future.

CN was chosen as this year's recipient of the Rix Award for Engaged Corporate Citizenship in recognition of the company's outstanding customer focus, outreach, environmental initiatives, engagement with the First Nations, and safety record.

Founded over a century ago, CN was an early Canadian pioneer of innovative transportation solutions. Over the last one hundred years, CN has evolved from a Federal Crown Corporation to a private company with a network spanning 32,000 kilometers. CN is the railway that uniquely spans North America from Eastern Canada to Western Canada to the Gulf of Mexico. For more than 100 years, CN has been serving Canada's economy, from building the country to now moving over $250 billion worth of its customers' goods annually.

The company and its employees are committed to delivering responsibly through several programs aimed at giving back, including the CN Employees' and Pensioners' Community Fund. Thanks to the generosity of CN employees and pensioners, the fund has raised over $17 million in the last decade to support a range of non-profit organizations in communities across North America.

In celebration of its 100th anniversary, CN announced the creation of the CN Vancouver Community Board in 2019. Comprised of local community leaders and chaired by former British Columbia Premier Christy Clark, the board will provide input on the company's investments in local community causes and initiatives across the Metro Vancouver region.

CN is also a champion for environmental stewardship. The company has achieved a 40% reduction in their greenhouse gas (GHG) emission intensity over the past 25 years, and is an industry leader in rail fuel efficiency, using 15% less fuel per gross ton mile than the industry average.

The company launched its EcoConnexions program in 2011 with the goal of conserving energy and reducing waste at CN yards and offices across North America. Powered by a $5 million EcoFund, the program has been successful in reducing energy consumption in key yards by over 29%, as well as diverting over 90% of operational waste from landfills. In addition, the EcoConnexions program has funded the planting of over 2 million trees across North America since 2012. Most recently, this included the planting of 100 trees for a 'CN 100' legacy forest in Moodyville Park in North Vancouver.

CN is also recognized for their commitment to becoming the safest railway in North America. Working with first responders, municipalities, neighbours, and customers, CN is constantly improving its protocols, training, and communication techniques to ensure the highest standards of employee and community safety.

CN is currently deploying important safety enhancing technologies across its network, such as the Autonomous Track Inspection Program, Distributed Air Cars, and Automated Inspection Portals. These innovations, combined with CN's investments in locomotives, capacity, infrastructure, and train crews, will support the safe and efficient movement of its customers' goods to their end markets.