State of the City Address with Mayor Kennedy Stewart

Following the orders announced under the Emergency Program Act we encourage you to, walk, carpool, ride a bike, or take transit to this event.

In order to comply with Public Health Orders:

We want you to be part of the discussion. To participate, go to slido.com and use the password #MAYORSTEWART

Businesses in Vancouver and all over Canada, large and small, rely on everyone at the Port of Vancouver to keep their goods moving. From ensuring food and essential household products get to communities across the country, to making Canada's natural resources and local business products accessible to markets around the world, activities at our port support local jobs and businesses across the country. Learn more 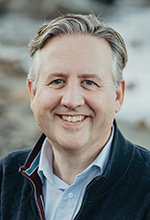 In his final State of the City address before next fall's municipal elections, Mayor Kennedy Stewart will reflect on three years in office. While much has been accomplished on housing, the overdose crisis, transportation, and the local economy – there remains more to do.

Vancouver has proven itself one of the safest places in the world during the COVID-19 pandemic, and as we reopen to the world, now is the time for Vancouver to show how cities can lead with a housing plan, an economic plan, and a climate plan that works for all of us.

Kennedy Stewart was elected the 40th Mayor of Vancouver on October 20, 2018, and is the City's first independent Mayor in three decades. Born in Nova Scotia, he arrived in Vancouver with $100 in his pocket and worked odd jobs to pay his way through university, eventually earning a Ph.D. from the London School of Economics.

Mayor Stewart's priority is to work every day on building partnerships to deliver the housing we need, tackle the overdose crisis, and invest in transit to build sustainable and walkable communities.

As a long-time renter in downtown Vancouver, where he lives with his wife Jeanette, Mayor Stewart is focused on rapidly building housing in every neighbourhood to keep our city welcoming and vibrant. He believes that by driving the cost of living low while keeping the quality of public services high, we can build a Vancouver that works for everyone.