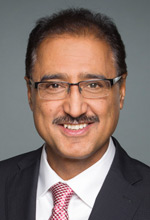 As the gateway to the Asia Pacific, Greater Vancouver's transportation and transit infrastructure is key to keeping our provincial and national economy moving. Our air, marine, rail, road, and transit networks all contribute in a concerted manner in ensuring people get to their destinations and that goods get to market. The new federal government has recognized this by committing $125 billion in new infrastructure funding across Canada over the next 10 years.

Hear from the Honourable Amarjeet Sohi, Canada's Minister of Infrastructure and Communities, as he delivers an address to Greater Vancouver's business community on his vision for the federal government's plan to double infrastructure spending over the next 10 years.

Elected three times as an Edmonton City Councillor, Amarjeet Sohi became the Member of Parliament for Edmonton Mill Woods on October 19th 2015 and was named Canada's Minister of Infrastructure and Communities.

Minister Sohi grew up in the Indian state of Punjab and immigrated to Edmonton in 1981. Arriving speaking almost no English, he took ESL classes and became an actor in a Punjabi theatre group in the city. He became a bus driver for Edmonton transit which he continued for 10 years before running for an unsuccessful bid for Edmonton City Council in 2004. He ran again in 2007, this time successfully, and represented Ward Six until his election to Parliament this year.

During his time on council, Minister Sohi was dedicated to improving Edmonton's infrastructure and livability. Sohi represented the city of Edmonton on the Canadian Urban Transit Association, and has been a strong advocate for light rail transit. He also advocated municipal interests to other levels of government through his delegation to the Alberta Urban Municipalities Association.