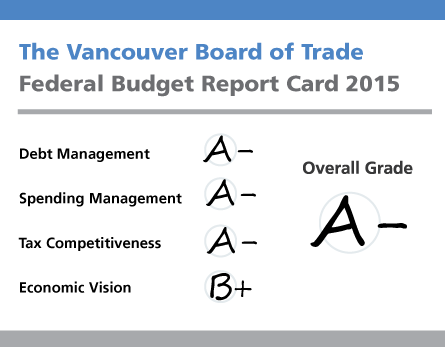 VANCOUVER, B.C. — The Vancouver Board of Trade, representing thousands of businesses across Greater Vancouver and B.C., has assigned an overall grade of "A-" to Federal Budget 2015. This grade was awarded as a result of the budget's focus on incentives to promote small and medium-sized businesses, improve gender diversity in business, and bolster national infrastructure.

"In addition to the confirmation of the Public Transit Fund, we are particularly pleased with the $700-million announcement to support the Action Plan for Women Entrepreneurs. The Board of Trade's Women's Leadership Circle submitted recommendations to the OSC regarding gender representation on boards – specifically to adopt a stance of 'comply or explain' – and we are pleased it was adopted. Today's budget announced the federal government's intent to enact similar legislative changes."

The Vancouver Board of Trade graded the federal budget on four criteria and assessed whether it met the organization's recommendations, which were previously submitted to Finance Minister Joe Oliver in a detailed letter.

The federal government continues to be on track to achieve its target debt-to-GDP ratio of 25 per cent by 2021. This will benefit taxpayers through lower debt-servicing costs and will help Canada maintain its strong triple-A credit rating, in addition to one of the lowest debt-to-GDP rates among the G7.

The federal government has continued to demonstrate spending restraint, while still investing in infrastructure. As a share of GDP, program expenses are projected to decline from 13.1 per cent in 2013-14 to 12.7 per cent in 2019-2020.

The Vancouver Board of Trade applauds various measures to promote small and medium-sized business. In particular, we note that the EI premium rate will be reduced, together with the creation of a net-zero rate setting mechanism for EI premiums, with excess amounts returned to employers and employees.

Small, new employers will also enjoy a reduction in the frequency of remittances. We also note the $50-million investment in a program to share the cost of exploring new export opportunities with small and medium-sized enterprises.

The Vancouver Board of Trade strongly supports the previously announced measures to support resource development, including accelerated CCA for LNG assets and the extension of the mineral exploration tax credit until March 31, 2016.

The Vancouver Board of Trade is strongly supportive of the announced Action Plan for Women Entrepreneurs, as well as its promise to modernize Canada's corporate governance framework through amendments to the Canada Business Corporations Act to promote gender diversity among public companies, using the widely recognized "comply or explain" model.

Budget 2015 commits new funding of $750-million over two years beginning in 2017-18 and $1 billion annually thereafter targeted to public transit projects. As well, there is increased focus on leveraging the private sector to deliver these needed infrastructure projects.

With the Government of Canada now finalizing free trade agreements under the Trans-Pacific Partnership, the focus now turns to Canadian companies that need to be positioned to fully capitalize from these global opportunities.

The Vancouver Board of Trade also applauds the commitment of $3 million over three years towards a Global Maritime Centre of Excellence, to promote West Coast Tourism and strengthen Port Metro Vancouver, as well as the proposal to expand the Electronic Travel Authorization eligibility to low-risk travelers from four countries, including Brazil and Mexico, in order to make Canada a more attractive destination for tourism and business.

Iain Black, President and CEO of The Vancouver Board of Trade, is available for media interviews.
A high-resolution image of Federal Budget Report Card 2015 is available for print.
Finance Minister Joe Oliver will give his annual VBOT Budget Recap on April 28, 2015.

About The Vancouver Board of Trade:

Since its inception in 1887, The Vancouver Board of Trade has been recognized as Pacific Canada's leading business association, engaging members to positively impact public policy at all three levels of government and to succeed and prosper in the global economy. With a Membership whose employees comprise one third of B.C.'s workforce, we are the largest business association between Victoria and Toronto. We leverage this collective strength, facilitating networking opportunities, and providing professional development through four unique Member programs. In addition, we operate one of the largest events businesses in the country, providing a platform for national and international business and thought leaders to further enlighten B.C.'s business leaders.