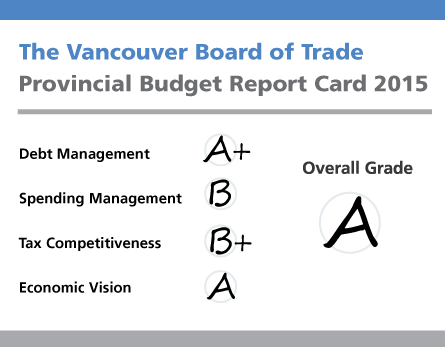 VICTORIA, B.C. — The Vancouver Board of Trade, representing 5,000 business members across Greater Vancouver and B.C., has assigned an overall grade of "A" to B.C. Budget 2015, based on the government's steadfast commitment to balancing the books, reducing debt, and stoking a variety of sectors of our economy.

"In a landscape of massive provincial deficits across Canada, B.C.'s government has not only delivered on its promise of another balanced budget, but has also taken meaningful steps to help further diversify our economy," said Iain Black, President and CEO of The Vancouver Board of Trade. "After two years of developing global interest in B.C.'s LNG potential, this year's budget has selected four or five other key industries for strategic investment and growth – from the film industry to mining, aerospace, and a Maritime Centre of Excellence."

Members of The Vancouver Board of Trade's Government Budget and Finance Committee attended today's provincial budget lockup in Victoria, where they received an advanced copy of the budget and assessed it based on four criteria (below). The criteria were originally submitted to B.C.'s Finance Minister Mike de Jong in a detailed letter earlier this year, along with recommendations.

"Our committee has been focused on seeing the government return to pre-2009/10 debt-to-GDP levels, not increasing taxes for businesses, and controlling spending," said George Kondopulos, Tax Partner at KPMG LLP and volunteer Chair of The Vancouver Board of Trade's Government Budget and Finance Committee. "This year's budget makes remarkable progress on reducing the debt-to-GDP ratio, and announced focused investment in areas that are important to the long-term economic success of the province, while holding steady on already very competitive business and personal tax rates."

Debt Management: A+
Spending Management: B
Tax Competitiveness: B+
Economic Vision: A
Overall Grade: A