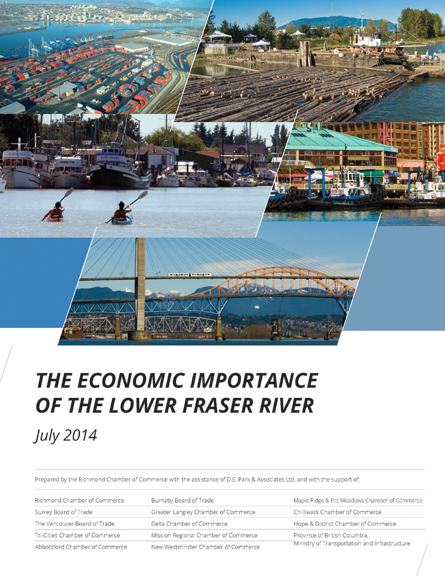 Today, chambers of commerce from the Lower Mainland and Fraser Valley released a new research study which concludes that $50 billion in economic development along the Lower Fraser River is at risk unless all levels of government act now to address the serious issues facing the river.

"With over 300,000 people in the flood plain – and another one million expected to live in the region by 2040 – the risks are too great to ignore."

Among the risks identified in the report are:

Inadequate flood protection infrastructure, which right now might not contain high tides in El Nino years;
Lack of action on annual sediment removal from spring freshets, which each year move over 30 million m3 of sediment and leave about 3 million m3 of silt in the navigation and secondary channels of the lower reaches; and,
By the end of this century sea levels at the mouth of the river could potentially rise more than one meter due to climate change overtopping the diking system.

Based on these and other serious risks to the economic benefits of the Fraser River, every chamber of commerce in the Lower Mainland – from the mouth of the river around Richmond, to the entrance to the Fraser canyon at Hope, are calling on senior levels of government to act now to commit funding to head off potential disaster.

"The current costs just for diking upgrades for the tidal areas of the river and for adjacent coastal reaches required by 2100 are in range of $9 billion," said Matt Pitcairn, the Manager of Policy and Communications at the Richmond Chamber of Commerce and the report's co-author. "Damage from a major dike failure could be in the tens of billions of dollars, with very serious effects to the economy of this region, British Columbia and all of Canada due to the impact on the transportation of goods and services," said Pitcairn.

"The first step is to bring together the relevant stakeholders into a group," concluded Park. "They should then be empowered to develop a collaborative strategy that will include the long term funding needed to deal with the significant risks to the Lower Fraser River, the region, and entire the national economy."

The Lower Fraser River is a vitally important resource for the Lower Mainland, British Columbia, and Canada as a whole, with port activity that rivals Canadian traffic on the St. Lawrence Seaway. In addition to port activity, the river supports a myriad of other economic activities vital to the region and beyond, such as:

The Chambers of Commerce chose today to release the report in conjunction with the launch of the Lower Mainland Flood Management Strategy by the Fraser Basin Council.

"The impact from potential floods are a major risk identified in our study," said Pitcairn, "and we welcome the collaborative approach announced by the Fraser Basin Council today, to implement an integrated regional flood management strategy."

The next step in the process of bringing greater awareness and attention to the major risks facing the sustainability and prosperity of the Lower Fraser River will be a forum hosted on Oct. 16 in Surrey by the lower mainland chambers and boards of trade.

This one day event will explore in greater detail the findings of the research report and how to best act on them. Senior elected officials and staff from all levels of governments will be invited, as will be First Nations and representatives of major stakeholder organizations.