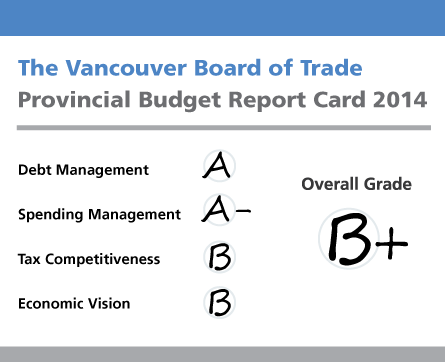 VICTORIA, B.C. — Finance Minister Mike de Jong may have called this year's provincial budget a "triple B" effort (a "boring balanced budget"), but The Vancouver Board of Trade thinks today's budget deserved a B+.

"Boring seems to be the new sexy," said Iain Black, President and CEO of The Vancouver Board of Trade. "The core themes of this budget are clearly 'stay the course,' 'prudence,' and 'vigilance.' While no budget can please every stakeholder, the principles underpinning Budget 2014 are sound and consistent. The Metro Vancouver business community should be confident that our provincial finances are well in hand."

Members of The Vancouver Board of Trade's Government Budget and Finance Committee attended today's provincial budget lockup in Victoria, where they received an advanced copy of the budget and assessed it based on four criteria (below). The criteria were originally submitted to B.C.'s Finance Minister Mike de Jong in a detailed letter earlier this year, along with recommendations.

"Our committee was clearly focused on seeing the government achieve a balanced budget, control spending over the short term, and make meaningful progress on the debt-to-GDP ratio, which has largely been achieved by this budget," said Lori Mathison, Managing Partner of the Vancouver office of Dentons Canada LLP, and Chair of The Vancouver Board of Trade's Government Budget and Finance Committee.

Below are the 2014 results from The Vancouver Board of Trade's annual Provincial Budget Report Card, which the Board of Trade issued on behalf of its thousands of members across British Columbia.

Debt Management: A
The Vancouver Board of Trade applauds the return to a balanced budget, coupled with a conservative contingency and allowances. B.C.'s continued AAA credit rating is a strong measure of confidence in our economy.

Spending Management: A-
The government is carefully controlling spending to achieve a balanced budget. Creative means to reduce government spending continue to emerge in this budget, including improved cash flow management.

Tax Competitiveness: B
B.C. is fortunate to be a low-tax jurisdiction. The lack of any material changes, specifically tax increases on businesses, was positive, however, this budget did not reflect some of the specific PST changes proposed to the Minister by The Vancouver Board of Trade during consultation.

Economic Vision: B
Further investment into the trade sector is a helpful step toward addressing the forecasted skills shortage in the province, and will lead to jobs in British Columbia. While the budget provides for key principles and rate ranges around the LNG taxation regime, more concrete details will help business assess the LNG opportunities.