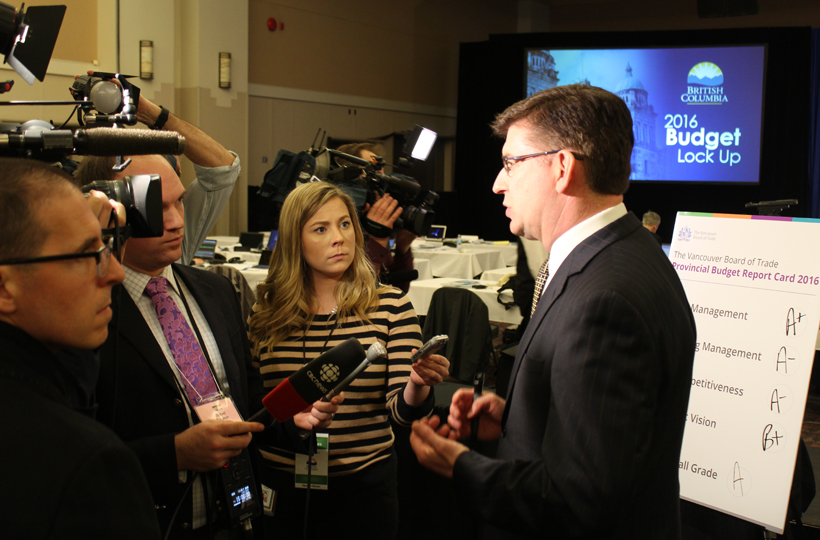 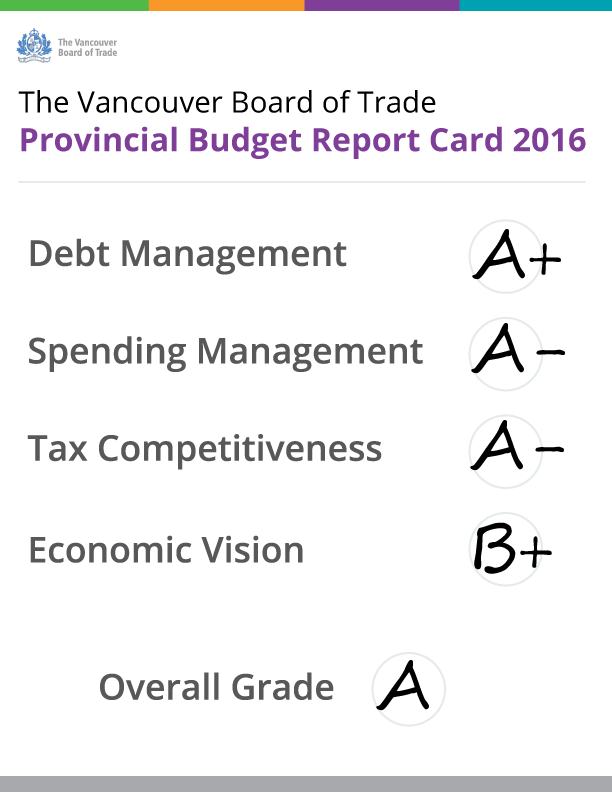 The Vancouver Board of Trade, representing thousands of businesses across the Greater Vancouver region, has assigned an overall grade of "A" to the 2016-17 provincial budget, based on the government's commitment to disciplined spending, paying down direct operating debt, and improving B.C.'s tax competitiveness.

"Balancing the budget for a fourth year in a row ­– while other provinces grapple with debt, deficits, and economic uncertainty – is an accomplishment that gives the business community reassurance that B.C. is on the correct course," said Iain Black, President and CEO of The Vancouver Board of Trade.

"Economists across Canada are predicting that B.C. will lead the country in economic growth this year. It's clear that is not by coincidence. The government's commitment to strong fiscal management in recent years, as demonstrated in today's budget, positions our province to remain ahead of the pack for years to come."

Members of The Vancouver Board of Trade's Government Budget and Finance Committee attended today's budget lockup in Victoria, where they received an advanced copy of the budget and assessed it based on four criteria (below). The criteria were originally submitted to Finance Minister Michael de Jong in a detailed letter in November 2015, along with recommendations for the government. (Read The Vancouver Board of Trade's pre-budget submission).

"This year's budget has delivered on a number of our requests to the provincial government," said George Kondopulos, Partner, Tax at KPMG and Chair of The Vancouver Board of Trade's Government Budget and Finance Committee.

"We were particularly encouraged to see fiscal discipline in light of the continued economic uncertainty seen elsewhere in Canada and the world, the establishment of a commission on tax competitiveness to evaluate current taxation instruments like the provincial sales tax, and proposed changes to the property transfer tax to start addressing housing affordability by increasing the exemption threshold and introducing a third tax rate on higher-valued properties."

In addition, B.C. boasts a low debt-to-GDP ratio of 17.4 per cent, which is exceptional when compared to other Canadian provinces that are ballooning upwards to 40 or 50 per cent. This has once again led to B.C. being the only province with an AAA-credit rating by both Moody's and Standard & Poor's, which sends a clear message to the international community that B.C. is a safe haven in which to invest and do business.

The government continues to prudently monitor its spending and manage stable annual funding increases to the health-care budget.

We join other business organizations, such as the BC Chamber of Commerce, in applauding today’s announcement that B.C. will establish a new Commission on Tax Competitiveness, with a goal of modernizing our current sales tax.

“Keeping taxes competitive is crucial for our small business Members across Greater Vancouver, and it will help us continue to attract new jobs and investments to B.C.,” said Black. “We are also encouraged to see the government expanding the Small Business Venture Capital Tax Credit budget by $5 million.”

“We are pleased that the government has responded to two specific requests made by The Vancouver Board of Trade in our pre-budget consultations regarding the property transfer tax and housing affordability,” said Black. “We look forward to future announcements regarding joint federal initiatives including transit and transportation, eliminating internal barriers to trade, and human capital.”