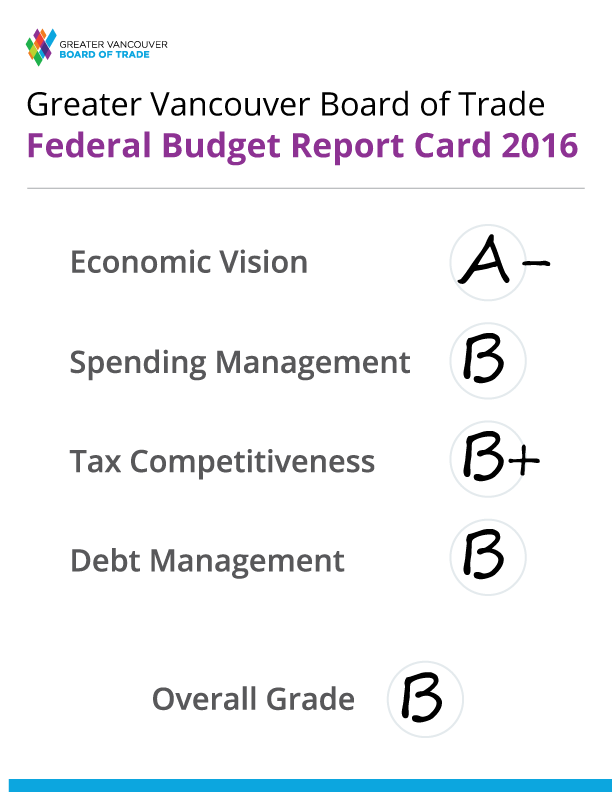 On behalf of its thousands of Members across the Lower Mainland, the Greater Vancouver Board of Trade has assigned an overall grade of "B" on its 2016 Federal Budget Report Card.

The grade was determined by the Board of Trade's Government Budget and Finance Committee, based on four key criteria — economic vision, spending management, tax competitiveness, and debt management — which were originally submitted to Finance Minister Bill Morneau in December 2015.

"Today's budget delivered on the government's election promise to boost spending for social programs and stimulate growth in key sectors of our economy. While the business community will always be cautious when it comes to embracing large deficits, we are satisfied that many key economic investments and priorities have been included," said Iain Black, President and CEO, Greater Vancouver Board of Trade.

"We will continue to urge the government to remain vigilant about its spending and keep our debt-to-GDP ratio on a downward trajectory.  In the coming months, we will also strongly encourage the government to communicate its roadmap to return our country to a balanced budget," added Black.

The Greater Vancouver Board of Trade applauds today's budget in terms of its economic vision for the future. In particular for our region, we are happy to see Ottawa commit to providing 50 per cent of funding for transit infrastructure projects, instead of the previous "one third" model. In addition, the government will also provide funding to help accelerate design, implementation and construction work for new large-scale projects in Greater Vancouver.

"We see the $370-million allocated for the Lower Mainland as a down payment that will help move forward two key projects that our organization has been advocating for — the extension of the Broadway subway line, and rapid transit into Surrey and Langley," said Black. "This is welcome news for Greater Vancouver, which needs to take collective action to improve the movement of our people and goods."

While the government's increase in annual spending was substantial, the committee was satisfied that the increase was largely focused in areas which will have both direct and indirect economic benefits in years to come.

The committee was pleased with the specific inclusion of the one-year extension of the Mineral Exploration Tax Credit, and the $8.4-billion investment in capacity-building, education and social infrastructure for First Nations.  This investment has the potential to both permanently break the cycle of poverty or near-poverty for First Nations families, and help enable many First Nations youth to become full participants in the economy.

The committee was glad to see no increase to business tax rates, however, the budget proposes that the small business rate will remain at 10.5 per cent (the rate was set to decrease to 9 per cent in 2019). The combined federal-provincial tax rate for small businesses in B.C. will remain at 13 per cent for 2016, which is reasonable when compared to other jurisdictions (and lower than all other Canadian provinces except Manitoba and Saskatchewan).

In terms of debt management, the committee was satisfied that the increased spending is being reasonably matched with economic growth, such that the important debt-to-GDP ratio remains stable through the projected years. It is worth noting, however, that we believe it is incumbent on the government to keep spending within declared levels, and to appropriately apply any unexpected gains (i.e. from a stronger than forecast GDP growth, higher energy prices, etc.) to the deficit and thus hasten the return to a balanced budget.