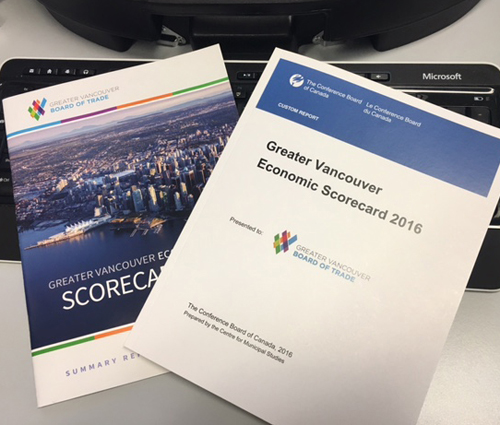 With a 9th place overall ranking, ensuring the region's economic vitality is key

Prepared by The Conference Board of Canada, the detailed scorecard delivers mixed results for the Greater Vancouver region. Greater Vancouver places 9th out of 20 in the overall ranking, ahead of Toronto, Montreal and Halifax. Singapore is the overall leader, while Calgary is the highest ranked Canadian metropolitan region in 4th place. But with all indicators in this analysis ending in 2014 or earlier, it is important to note that this ranking does not take into account the impact of the steep decline in oil and gas prices.

In the Economy category, Greater Vancouver receives a 9th place rank and "B" grade.

Greater Vancouver gets an "A" grade for its affordable office rents, which on a square foot basis trails only Montréal among North American metro regions. As well, its five-year average growth rates for real GDP per capita and after-tax income are fairly solid by North American standards. Moreover, Greater Vancouver boasts healthy activity at its port and airport, reinforcing the view that the transportation sector is a major component of the region's economy and should remain a key priority area for policymakers.

Indeed, the importance of Greater Vancouver's role as Canada's gateway to Asia cannot be overstated. Vancouver International Airport and the Port of Vancouver have a geographic edge—both being among the closest large North American facilities in their respective industry to many fast-growth Asian markets.

Although Greater Vancouver also earns an "A" grade on KPMG's Total Tax Index, as local businesses enjoy relatively low statutory labour costs, the region is much less competitive when it comes to the marginal effective tax rate on capital, an indicator specifically designed to measure incentives for business investment.

Other regional challenges revealed in the Economy category include relatively weak venture capital investment (although it leads all Canadian cities) and low levels of labour productivity. Greater Vancouver ranks fourth (out of 11 metro areas for which data are available) on venture capital investment per $1 million per GDP, but it remains well behind leaders San Francisco, Houston, and Seattle. To boost its productivity levels, Greater Vancouver could look for ways to improve innovation.

Greater Vancouver ranks seventh overall in the Social category with a "B" grade, placing it higher than all its Canadian counterparts except Toronto. It gets high scores for its clean air (an indicator in which it tops all metro areas), relatively large proportion of foreign-born residents, and low homicide rate.

However, the region receives "D" grades on housing affordability and proportion of 25–34 year olds. These two results are likely linked, as the metro area is the most expensive region in Canada, which, in turn, makes relocating to Greater Vancouver financially daunting especially for younger people.  These two factors represent a major barrier to retaining and attracting talent and business investment.

Long commute times are also adding to Greater Vancouver's difficulties in attracting high-end talent. The benchmarking analysis shows that Greater Vancouver's performance in this area is poor—it gets "C" grades for the average commute time to and from work and for the proportion of the workforce that non-car commutes. Therefore, cementing Greater Vancouver's status as a Canadian economic leader requires a commitment to invest in its transportation grid and public transit infrastructure.

Despite Greater Vancouver's bright near-term economic outlook, the region's long-term performance will depend on the ability of its leaders to deal with seven important challenges revealed in our study:

"If left unaddressed, these challenges could prevent Greater Vancouver from fully realizing the advantages of being a preferred gateway economy to Asia, as well as deter talented people and business investment—both crucial ingredients for success in an increasingly globalized and competitive world," said Daniel Muzyka, President and CEO of The Conference Board of Canada. "Greater regional co-ordination is essential if these challenges are to be met successfully."

The Board of Directors of the Greater Vancouver Board of Trade has carefully considered the Scorecard and its findings. GVBOT intends to focus its public policy efforts on improving and enhancing Greater Vancouver's performance in certain aspects of the Scorecard, and have identified the following areas for our immediate attention:

Gateway Resources:  Greater Vancouver is Canada's gateway to Asia, a natural position which offers immense economic opportunity.  To retain this enviable position, it is of national importance that we to continue to invest in transportation infrastructure so we are a highly efficient and environmentally responsible gateway.  We also must ensure that there is available land to provide access and to accommodate infrastructure.

Human Capital: Greater Vancouver has successfully been using technology and knowledge to leverage more traditional industries.  To continue, Greater Vancouver needs to attract, develop and retain a well-educated and diverse workforce. In particular, this means increased focus on education, immigration, social infrastructure and the participation of women and indigenous peoples in the economy.

Regional Coordination: The Scorecard highlights Greater Vancouver's relative strength and competitiveness as an economic region.  Going forward, we need improved coordination and accountability of Greater Vancouver municipalities to ensure optimal decisions for and investments into our collective future.

Greater Vancouver is Canada's third largest metro region in population and economic activity, behind Toronto and Montreal. It boasts nearly 2.5 million residents and in 2014 produced goods and services valued at $119 billion – 58 per cent of British Columbia's real GDP.

Since its inception in 1887, the Greater Vancouver Board of Trade has been recognized as Pacific Canada's leading business association, engaging members to positively impact public policy at all levels of government and to succeed and prosper in the global economy. With a Membership whose employees comprise one third of B.C.'s workforce, we are the largest business association between Victoria and Toronto. We leverage this collective strength, facilitating networking opportunities, and providing professional development through four unique Signature Programs. In addition, we operate one of the largest events businesses in the country, providing a platform for national and international business and thought leaders to further enlighten B.C.'s business leaders.

About The Conference Board of Canada:

The Conference Board of Canada is the largest non-partisan, not-for-profit, evidence-based research organization in Canada.  For more than 60 years, the organization has been bringing together ideas across research disciplines and people across sectors to address the complex issues that matter most to Canada's future. They are specialists in the areas of economic trends, industry and business strategy, leadership and human resources, and public policy.