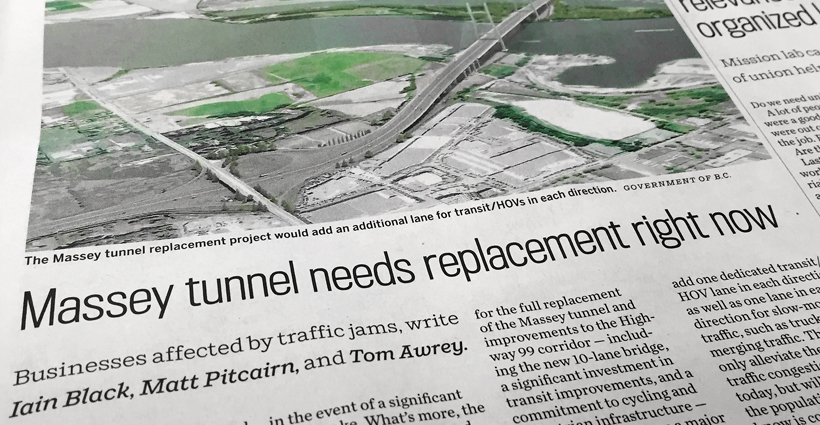 Note: This op-ed was originally published in The Vancouver Sun on July 6, 2016.

The Greater Vancouver Board of Trade, Richmond Chamber of Commerce, and Delta Chamber of Commerce are disappointed to learn that Metro Vancouver is opposing the provincial government’s plans to replace the aging George Massey Tunnel and improve the Highway 99 corridor.

Metro Vancouver’s decision was made without consultation with the region’s business community, including our three organizations, which collectively represent thousands of local businesses. Many of these businesses are directly affected by the traffic gridlock created by the current tunnel, and have been urgently calling for a replacement that will get residents, tourists, and goods moving again.

The Massey Tunnel is a critical link in the Highway 99 corridor, which connects our region to the U.S. Interstate highway system, the B.C. Ferries terminal in Tsawwassen, the Deltaport container terminal, and Vancouver International Airport in Richmond. All of these are key parts of Canada’s Pacific Gateway, which is of national economic importance.

The current tunnel is nearing the end of its service life and does not meet modern seismic standards, which could be catastrophic in the event of a significant earthquake. What’s more, the tunnel is operating beyond its capacity for upwards of 13 hours each day, resulting in traffic congestion that often stretches for kilometres in each direction. As our region grows, this will only get worse.

For the past four years, chambers of commerce and boards of trade from across our region have actively participated in each round of consultation and engagement for the Massey Tunnel replacement project. This included Phase 2 of the consultation, during which the Province asked the public and stakeholders about five potential replacement options. Like most participants in this process, and after thorough due diligence, our organizations endorsed a new bridge to replace the tunnel.

When the Province officially announced plans for the full replacement of the Massey Tunnel and improvements to the Highway 99 corridor — including the new 10-lane bridge, a significant investment in transit improvements, and a commitment to cycling and pedestrian infrastructure — we considered this as a major milestone for the movement of people and goods throughout the region.

The recently released Greater Vancouver Economic Scorecard identified inadequate public transit and road infrastructure as a major obstacle to our regional prosperity, and Metro Vancouver’s resistance to this project only exacerbates the issues we are facing. The 10-lane Massey Tunnel Replacement is necessary to address these challenges to our regional infrastructure and national supply chains.

A 10-lane bridge would maintain the current three lanes that the counterflow provides today. It would also add one dedicated transit/HOV lane in each direction, as well as one lane in each direction for slow-moving traffic, such as trucks and merging traffic. This will not only alleviate the significant traffic congestion we face today, but will prepare us for the population growth we know is coming over the next 15 to 20 years, particularly south of the Fraser.

We have heard loud and clear from our members, and the community more broadly, that they fully support this project. In order for our region to survive and thrive, we need to be able to move around. This includes investments in transit, more cycling infrastructure, and — yes — new and improved roads when our old ones are out of date and no longer meet our needs.

The Massey Tunnel and Highway 99 corridor is a vital goods movement route that drives our local, regional, provincial, and national economies. It’s time to move forward and replace this critical piece of aging infrastructure with the effective and well-canvassed bridge alternative already underway.

Read the original op-ed on The Vancouver Sun website