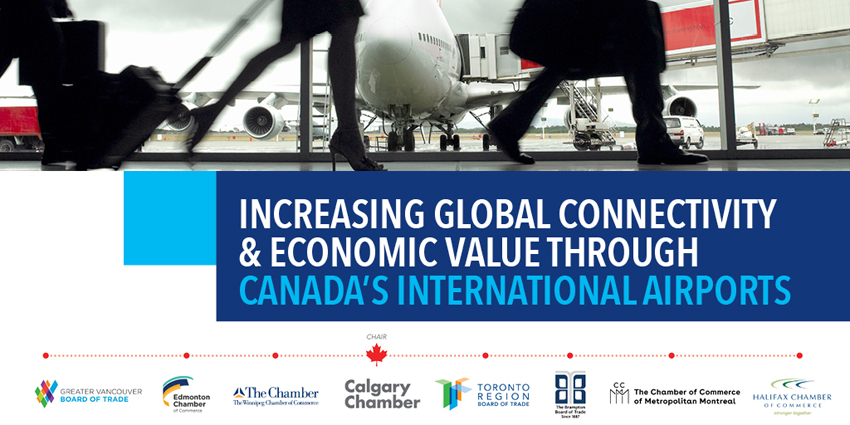 OTTAWA — The Canadian Global Cities Council (CGCC), a coalition of Canada’s eight largest urban regional chambers of commerce, is calling for airport policy reform to align Canada with global best practices, and for our international airports to be factored into transit infrastructure planning by all levels of government.

Economic performance is increasingly tied to global relevance. Airports, and the communities they serve at home and abroad, are prime economic engines that require supportive policies and robust government services. They create vital access to high growth markets and facilitate significant economic benefits for tourism, trade, and overall business productivity.

“Canada’s international airports play a pivotal role in supporting our economy by facilitating the movement of people, goods, services and ideas,” said Adam Legge, President and CEO of the Calgary Chamber of Commerce and Chair of the Canadian Global Cities Council. “While our airports drive a collective $59-billion in economic activity, our current state hinders our economic potential, and affects Canada’s profile and ability to remain relevant in the eyes of foreign investors, international business travellers and tourists.”

The CGCC has identified five recommendations for Canada’s airports policy across three categories:


Members of the CGCC and CAC discussed these recommendations this morning at an Economic Club of Canada event in Ottawa. CGCC members will also spend the day on Parliament Hill to meet with federal ministers and share their point of view on Canada’s International Airports Policy.

About the Canadian Global Cities Council:

Founded in 2015, the Canadian Global Cities Council (CGCC) is a coalition of Presidents and CEOs of the eight largest urban regional Chambers of Commerce/Boards of Trade in Canada: Brampton, Calgary, Edmonton, Halifax, Montreal, Toronto, Vancouver, and Winnipeg. Representing 52 per cent of Canada’s GDP and more than half of the country’s population, CGCC collaborates on international and domestic issues impacting our regions’ competitiveness. We are focused on infrastructure, economic environment, trade, and talent. Learn more at globalcitiescouncil.com.

Since its inception in 1887, the Greater Vancouver Board of Trade has been recognized as Pacific Canada's leading business association, engaging members to impact public policy at all levels of government and to succeed and prosper in the global economy. With a Membership whose employees comprise one-third of B.C.'s workforce, we are the largest business association between Victoria and Toronto. We leverage this collective strength, facilitating networking opportunities, and providing professional development through four unique Signature Programs. In addition, we operate one of the largest events programs in the country, providing a platform for national and international thought leaders to enlighten B.C.'s business leaders. Learn more at boardoftrade.com.