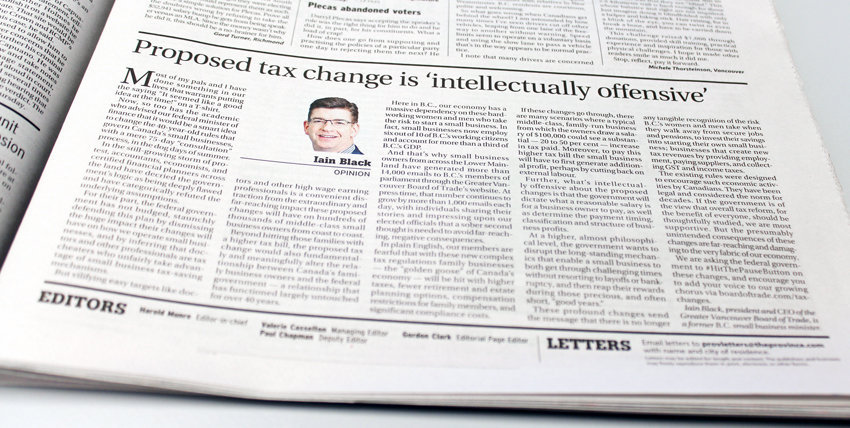 Note: This op-ed was originally published in The Province newspaper on Sept. 14, 2017. Read the original here.

Most of my pals and I have done something in our lives that warrants putting the saying “It seemed like a good idea at the time!” on a T-shirt.

Now, so too has the academic who advised our federal minister of finance that it would be a smart idea to change the 40-year-old rules that govern Canada’s small businesses, with a mere 75-day “consultation” process, in the dog days of summer.

In the still-growing storm of protest, accountants, economists, and certified financial planners across the land have decried the government’s logic as being deeply flawed and have categorically refuted the underlying assumptions.

For their part, the federal government has not budged, staunchly defending this plan by dismissing the huge impact their changes will have on how we operate small businesses, and by inferring that doctors and other professionals are tax cheaters who unfairly take advantage of small business tax-saving mechanisms.

But vilifying easy targets like doctors and other high wage earning professionals is a convenient distraction from the extraordinary and far-reaching impact these proposed changes will have on hundreds of thousands of middle-class small business owners from coast to coast.

Beyond hitting those families with a higher tax bill, the proposed tax change would also fundamentally and meaningfully alter the relationship between Canada’s family business owners and the federal government — a relationship that has functioned largely untouched for over 40 years.

Here in B.C., our economy has a massive dependency on these hardworking women and men who take the risk to start a small business. In fact, small businesses now employ six out of 10 of B.C.’s working citizens and account for more than a third of B.C.’s GDP.

And that’s why small business owners from across the Lower Mainland have generated more than 14,000 emails to B.C.’s members of parliament through the Greater Vancouver Board of Trade’s website. At press time, that number continues to grow by more than 1,000 emails each day, with individuals sharing their stories and impressing upon our elected officials that a sober second thought is needed to avoid far-reaching, negative consequences.

In plain English, our members are fearful that with these new complex tax regulations family businesses — the “golden goose” of Canada’s economy — will be hit with higher taxes, fewer retirement and estate planning options, compensation restrictions for family members, and significant compliance costs.

If these changes go through, there are many scenarios where a typical middle-class, family-run business from which the owners draw a salary of $100,000 could see a substantial – 20 to 50 per cent – increase in tax paid. Moreover, to pay this higher tax bill the small business will have to first generate additional profit, perhaps by cutting back on external labour.

Further, what’s intellectually offensive about the proposed changes is that the government will dictate what a reasonable salary is for a business owner to pay, as well as determine the payment timing, classification and structure of business profits.

At a higher, almost philosophical level, the government wants to disrupt the long-standing mechanics that enable a small business to both get through challenging times without resorting to layoffs or bankruptcy, and then reap their rewards during those precious, and often short, “good years.”

These profound changes send the message that there is no longer any tangible recognition of the risk B.C.’s women and men take when they walk away from secure jobs and pensions, to invest their savings into starting their own small business; businesses that create new tax revenues by providing employment, paying suppliers, and collecting GST and income taxes.

The existing rules were designed to encourage such economic activities by Canadians. They have been legal and considered the norm for decades. If the government is of the view that overall tax reform, for the benefit of everyone, should be thoughtfully studied, we are most supportive. But the presumably unintended consequences of these changes are far-reaching and damaging to the very fabric of our economy.

We are asking the federal government to #HitThePauseButton on these changes, and encourage you to add your voice to our growing chorus via boardoftrade.com/taxchanges.

Iain Black is the President and CEO of the Greater Vancouver Board of Trade and a former B.C. small business minister.