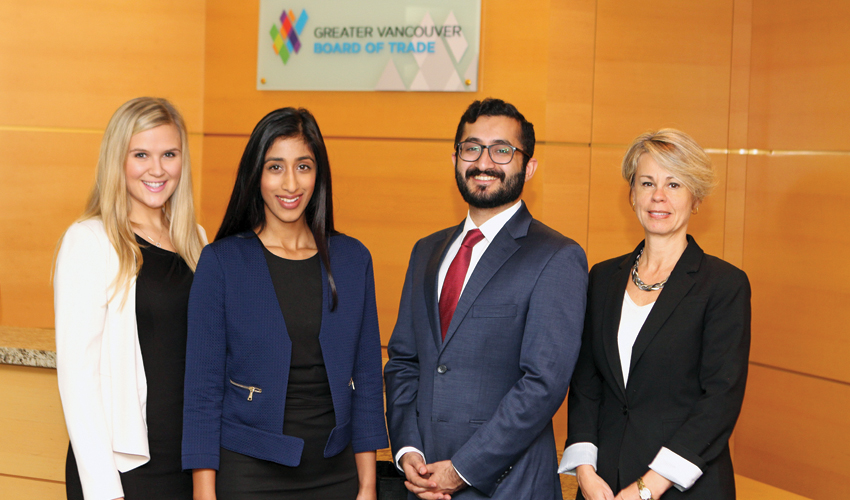 The Greater Vancouver Board of Trade is pleased to announce several new additions to its Public Policy and Advocacy team.

Beginning this month, Karen Graham will assume the role of Director, Advocacy and Stakeholder Relations, bringing with her more than a decade of experience in senior positions in the private, public and business association sectors.

For the past two years, Karen consulted for such diverse organizations as HQ Vancouver, Resource Works, and the Vancouver International Wine Festival. She holds a Master of Arts in International Relations from York University and a Master of Public Policy from Simon Fraser University.

In addition, the Board of Trade also recently added two new Policy Analysts to its team, including Sonia Takhar and Claudia Kempe.

Sonia holds a BA in Politics and Economics and is a recent graduate of UBC’s Masters of Public Policy and Global Affairs program. She has completed several wide-ranging internships including the Asia Pacific Foundation where she analyzed investment trends between Canada and Asia.

Sonia also spent time interning with the Conference Board of Canada’s Industry Business and Strategy Division. Sonia has worked with Global Affairs Canada and the Inter-American Development Bank.

Claudia joins us after her role as a Project Specialist with the Young Presidents’ Organization where she managed 69 Innovation Week virtual and in-person events around the world. She holds a BComm from UBC and an MSc In Business Development Studies from the Copenhagen Business School.

While in Europe, Claudia completed internships and with the Mission of Canada to the European Union, Embassy of Canada to Denmark, as well as the OECD where she focused on international trade, economic development, and SME policy.

Rounding out the team is Iqbal Ahmed, Manager of Public Policy Development, who celebrated his two-year anniversary with the Greater Vancouver Board of Trade in October.

Iqbal joined the GVBOT team with a strong background in both research and evidence-based advocacy. Upon accepting his position, he returned to Vancouver after serving as a Policy Analyst with the Calgary Chamber of Commerce, where he was the lead support to their Tax and Economic Affairs Committee and led the Chamber’s response to the NDP Government’s new minimum wage policy.

Iqbal is a graduate of UBC, where he studied Economics and Political Science before interning at the US Consulate in Vancouver and then working at the Woodrow Wilson Center in Washington, DC. He currently oversees GVBOT’s volunteer policy committees, managing the annual policy committee calendar and supporting the events team in developing content for our policy forums.

Learn more about the work of our public policy and advocacy department at boardoftrade.com/advocacy.