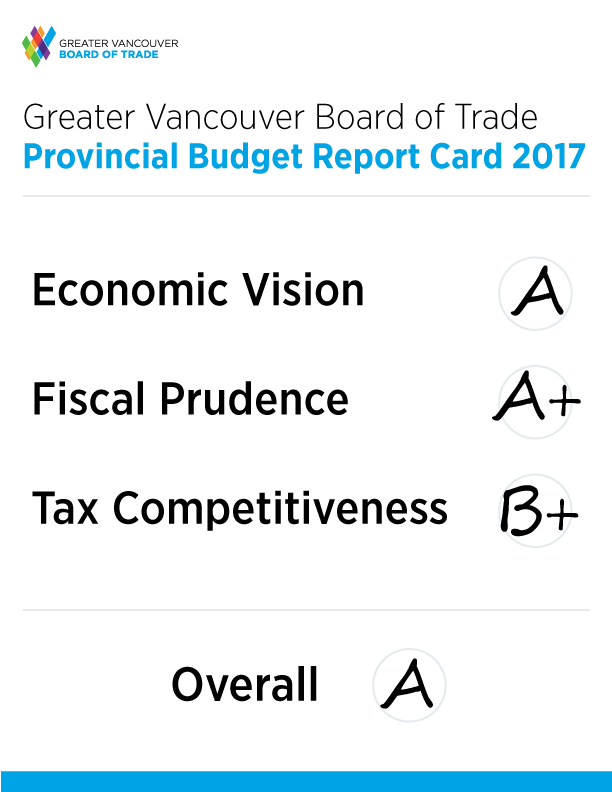 VICTORIA, B.C. — On behalf of thousands of businesses across the Lower Mainland, the Greater Vancouver Board of Trade has given the 2017-18 Provincial Budget an overall grade of "A."

Members of the Board of Trade's Government Budget and Finance Committee travelled to Victoria today for the provincial budget lockup, where they received an advanced copy of the budget and assessed it on three criteria: Economic Vision, Fiscal Prudence, and Tax Competitiveness.

The criteria were originally submitted to Minister of Finance Michael de Jong in November 2016, along with recommendations for the Provincial Government as they were preparing this year's budget. The full letter is available online at boardoftrade.com/bcbudgetletter2017. In addition, the Board of Trade formally solidified the top priorities of its Members in its 2017 Provincial Election Platform, which is available at boardoftrade.com/platform2017.

"There isn't a government of any political stripe in this country who wouldn't want to deliver today's budget," says Iain Black, President and CEO of the Greater Vancouver Board of Trade. "British Columbia continues to lead Canada in terms of financial management and economic strength, giving our business community a stable foundation on which to build.

"The business community looks to government to enable us to compete and help attract people and investment, all while building great communities," adds Black. "It's a big ask, yet this budget takes meaningful steps to achieve just that."

One of the top issues identified in our letter to Minister de Jong was the state of housing affordability in the Greater Vancouver region. Low housing affordability reduces our region's ability to attract and retain talented, skilled workers, which in turn makes it difficult to grow businesses.

In our letter to Minister de Jong, we called on the Province to work with municipalities to remove barriers to development and find ways to incentivize growth, density, and diversity in the housing stock. We are pleased to see that today's budget identifies measures to expedite housing development application, approval and permitting processes in partnership with local governments. Moving forward, collaboration between all levels of government will be the key to solving Greater Vancouver's housing affordability challenges.

In terms of transit and transportation funding, today's budget identifies $4.5 billion in investments over three years. This includes $2.3 billion for the replacement of the aging Massey Tunnel with a new 10-lane bridge, $731 million in transit infrastructure, $198 million for Highway 1 Lower Lynn Corridor improvements at the north end of the Second Narrows Bridge, and $70 million for the new, seventh counter-flow lane on the Alex Fraser Bridge. These investments are notable for our organization, given the importance of moving people and goods efficiently and the significant cost of congestion on our regional economy. In fact, transit and transportation was identified as the top priority of our 5,000+ Members in our 2017 Provincial Election Survey last fall. Moving forward, it will be important that the Province set aside the required funding to fully participate in cost-sharing of the Federal Government's Public Transit Infrastructure Fund.

We are also encouraged to see $165 million allocated in this budget for mental health care funding, including $45 million for mental health counselling for children, $12 million for specialized addiction treatment, and $5 million in startup costs for the new B.C. Centre on Substance Use. Funding for mental health care initiatives is an issue specifically identified in our pre-budget letter to government and our 2017 Provincial Election Platform, given that there is strong evidence that effective programs can reduce both the economic and health impacts of these illnesses.

The Provincial Government has also pledged an investment of $20 million in 2017-18 for child care funding, to support the creation of up to 2,000 new, additional, child-care spaces. In supporting initiatives such as child care and mental health care, the Province is helping to improve our region's ability to attract human capital, which is one of the Priority Focus Areas of our 2017 Provincial Election Platform.

In terms of debt reduction, we are very encouraged to see that B.C.'s direct operating debt is forecast to be $1.1 billion by the end of the current fiscal plan period, which marks a 90 per cent reduction since 2013-14. As Minister de Jong identified in his speech today, it is now within our Province's reach to eliminate our operating debt entirely, for the first time in 45 years.

We are pleased to see the Provincial Government making a concerted effort to improve B.C.'s tax competitiveness and embrace the recommendations of the independent Commission on Tax Competitiveness. We are specifically encouraged to see a commitment to analyze further steps that might be taken to make the PST a more competitive tax.

We applaud the Provincial Government for committing to phase out PST on electricity purchases. Once fully implemented, this tax change will save small and medium-sized businesses across the province approximately $50 million a year, which will allow them to be more competitive and reinvest in their businesses, including equipment, skills training and salaries.

Another announcement that will benefit Greater Vancouver Board of Trade Members is today's affirmation that the Provincial Government will cut the small business corporate income tax rate from 2.5 per cent to 2 per cent, which will make B.C. the second-most competitive tax environment for small business in the country.

We're also supportive of the Provincial Government's pledge to eventually eliminate Medical Services Plan premiums. As a first step, the Government has said it will cut premiums in half for families and individuals with a family net income of up to $120,000 per year beginning January 1, 2018.

In doing this, the Government will be reducing the tax burden on individuals, benefitting as many as two million British Columbians. Improving affordability is one of the key steps needed to help businesses attract human capital and talented workers to our region and province. This move will also benefit small and medium-sized businesses that currently pay MSP premiums as a benefit for their employees.

In his speech today, Minister de Jong also announced Government's intent to strike a new partnership between the Province and the Greater Vancouver Board of Trade. The intent is to fund a series of specific trade-enabling initiatives via the Board's World Trade Centre subsidiary, specifically including a program to "help build B.C.'s export capacity by training small and medium-sized enterprises across B.C. to better access export markets."

Our organization is excited about this new partnership with the Province, which will grow exports and help B.C. businesses tap into new markets across the globe. Watch for more details to be announced in the weeks ahead.