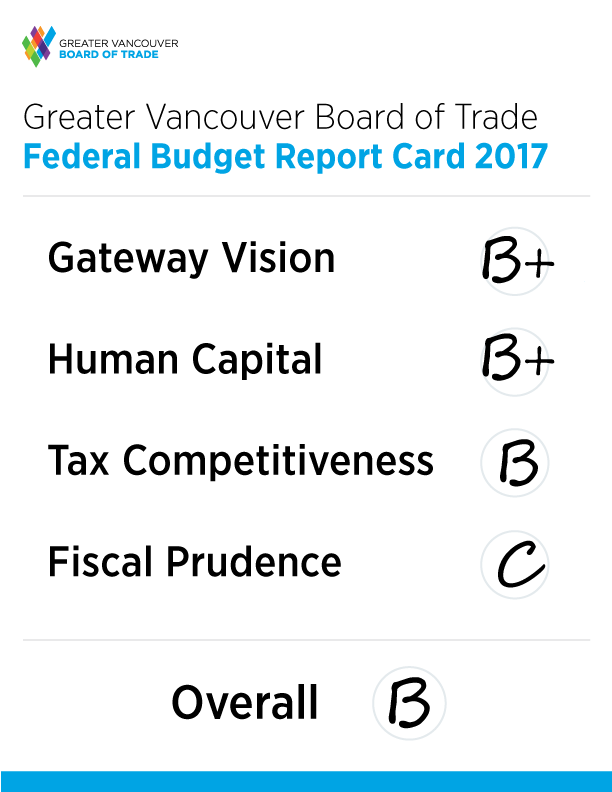 VANCOUVER, B.C. — On behalf of its thousands of Members across the Lower Mainland, the Greater Vancouver Board of Trade has assigned an overall grade of "B" on its 2017 Federal Budget Report Card.

The grade was determined by the organization's Government Budget and Finance Committee, based on four criteria — Gateway Vision, Human Capital, Tax Competitiveness, and Fiscal Prudence — which were originally submitted to Finance Minister Bill Morneau in December 2016. (Read the Board of Trade's pre-budget letter)

"While Budget 2017 supports the narrative and priorities identified shortly after the October 2015 election, it is also clearly awaiting meaningful moves from the current U.S. administration," said Iain Black, President and CEO of the Greater Vancouver Board of Trade.

"The competitiveness of our businesses — small or large — has never been more important than it is in the current global climate. We remain committed to working with the Federal Government to identify and implement the needed policy and strategic decisions to maximize private sector capital investment and job creation."

Our committee was pleased to see that Budget 2017 pledges $20.1 billion for public transit projects over 11 years, and specifically identifies the Millennium Line extension along the Broadway-UBC corridor as a key project. We join the Mayors' Council in applauding the federal government for committing $2.2 billion towards the major projects in the Mayors' 10-Year Transit Vision, given that these investments are crucial to addressing congestion in our region.

We also applaud the notable references to the Pacific Gateway and, specifically, the introduction of a National Trade Corridors Fund to "address urgent capacity constraints and freight bottlenecks at major ports of entry." Addressing these bottlenecks was a key request in our pre-budget submission to Minister Bill Morneau.

There has been recent, well-publicized speculation regarding the nationalization and then privatization of Canadian airports. In recent months we have shared our concern about such a direction, given the strategic value of YVR to B.C.'s and Canada's economy. As a result, we were relieved to see there was no mention of it in today's budget. However, the ongoing speculation will remain a concern for our organization until the Federal Government formally rejects its consideration of port and airport privatization, as it remains an unnecessary distraction for the strategic growth of Canada's Pacific Gateway.

In the Greater Vancouver Economic Scorecard 2016, the attraction, development, and retention of human capital was identified as a top priority for our region. In our December 2016 letter to Minister Morneau, we requested that the federal government take action on this file and specifically work to address the growing disparity between labour market supply and shifting labour market demands.

Accordingly, we were very pleased to note this budget has a substantial focus on addressing housing affordability, child care, and post-secondary skills training programs, as these initiatives are directly linked to the supply of skilled labour, particularly in large urban centres like Greater Vancouver. Our region's housing affordability is a key issue for the Board of Trade, and a new $5-billion National Housing Fund intended to help jump start new rental supply in the region is a welcome announcement.

While these investments will focus resources in areas important to our region's economic success, they would be more effective if they were accelerated to a timeframe shorter than the 10-year horizon announced today.

We are glad to see no changes have been made that undermine our country's tax competitiveness. However, we will remain vigilant on possible changes to the capital gains tax, the taxation of stock options, and additional personal and business tax increases.

In our letter to Minister Morneau, we asked for the Federal Government to develop and communicate a strategy to return Canada to a balanced budget within a reasonable period. Unfortunately, Budget 2017 did not meet those expectations, and the government has not shown how — or when — they plan to return our country to a balanced budget.