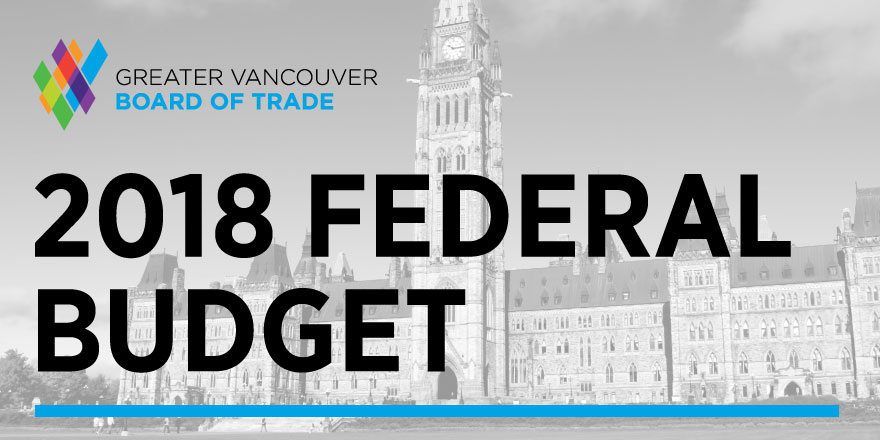 We commend the federal government’s efforts to improve gender equity and leverage untapped labour pools to create a stronger, more prosperous economy. However, aside from some funding for science and research, the budget contained few measures meant to make Canadian businesses more competitive.

In the face of tax reforms in the U.S. and the layering on of regulations and costs by all levels of government in this country, the Board of Trade remains concerned about the cumulative impacts of government policy on the business community.

Below is our Committee's commentary on the key measures included in the 2018-19 Federal Budget.

In terms of tax competitiveness, one key announcement was the long awaited introduction of the new taxation regime for holding passive investments inside a private corporation. The GVBOT supports the general objective of reforming Canada’s system of business taxation. However, its success will be measured by whether Canada remains competitive for financial and human capital, and the retention and attraction of business investment. Unfortunately, Budget 2018-19 did little to address this, or even to acknowledge risks posed by the external setting - including recent U.S. tax reforms and NAFTA renegotiations -  and the effects of these uncertainties on the planning and decision making setting for Canadian businesses.

In Budget 2018-19, government unveiled the remainder of the changes it proposes for the tax treatment of planning tools by private corporations. The GVBOT is pleased that government heard and responded to the concerns expressed by small businesses all across Canada: the tax measures in Budget 2018 represent a notable shift from the government’s original proposals announced in July 2017.

Specifically, the tax measures proposed in Budget 2018-19 to limit the tax deferral advantages on passive investment income earned inside private corporations address most of the concerns communicated by the GVBOT and other groups as part of government’s consultation in fall 2017. The proposed tax measures are now more targeted, will be less costly to administer (as they leverage pre-existing legislation) and will result in less uncertainty for business owners.

Overall, Budget 2018-19 did little to improve tax competitiveness for businesses in Canada, but instead mainly focused on closing perceived tax loopholes and improving the Canada Revenue Agency’s ability to administer and enforce the tax legislation.

Investment in Canada’s Pacific Gateway have long been a standing priority of the GVBOT. However, Budget 2018-19 made no mention of this vital national asset, nor of any transportation-related infrastructure investments.

While we were pleased to see the National Corridor Strategy in the previous budget, the overall funding available for improving and enhancing the Gateway from this program remains significantly below the necessary levels, and it is substantially behind in actually awarding the funds to begin needed projects. The GVBOT is disappointed that Budget 2018-19 neither expands nor expedites these investments.

Overall, GVBOT is pleased with the increased funding for research and efforts to encourage workforce participation from underutilized sources of labour. However, the GVBOT fears that initiatives under Budget 2018 neither adequately support the development of new businesses nor sufficiently address housing affordability to improve the attraction and retention of labour.

The GVBOT welcomes enhanced research funding, such as the $700 million investment over five years in the Industrial Research Assistance Program, which will support entrepreneurs and small business owners in developing and commercializing innovative technologies. It is, however, unclear if these mechanisms are enough to provide researchers the skills and encouragement necessary to spin out of institutions and create successful businesses.

In the face of a tightening labour market, we commend the Government for taking efforts to promote the skilled trades and developing under-leveraged parts of the workforce, which the 2016 Greater Vancouver Economic Scorecard identified as key steps in growing our economy. The GVBOT was pleased to see the Government commit $115 million to its Women Entrepreneurship Strategy and $19.9 million for an Apprenticeship Incentive Grant for Women. The budget also included a one-time $1 billion investment in the renamed Canada Workers Benefit, $2 billion over five years in a new Indigenous Skills and Employment Training Program, $448 million over five years in the Canada Summer Jobs program.

The introduction of five additional weeks of parental leave further aligns with the GVBOT’s recommendation of adopting policies to encourage workforce participation. In order to meaningfully impact female workforce engagement, this measure will likely need to be supplemented by evolving policies at the federal and provincial levels addressing child care and those that seek to mitigate the high cost of living in many of Canada’s cities.

We are pleased to see a $1.25 billion injection into the Rental Construction Financing Initiative, however our view is that a greater commitment to housing affordability at various levels of government is required to alleviate the pressure on the housing market and its effects on labour attraction and retention. Moreover, we are concerned that enhanced and streamlined recognition of foreign credentials, as previously recommended by the GVBOT, has been omitted from Budget 2018-19.

GVBOT acknowledges the steps Budget 2018-19 takes towards leveraging human capital: encouraging workforce participation of women, Indigenous peoples, and youth. Taken as a whole, these may have a meaningful impact over time. While the GVBOT applauds the government for its focus on this area, the omission of other priorities around human capital articulated by GVBOT in the past is regrettable.

We believe Canada must maintain a prudent debt-to-GDP ratio and return to a balanced budget as soon as possible.  While Budget 2018-19 does forecast a decline in the debt-to-GDP ratio over the next five years, the decline is entirely the result of economic growth, as government debt will continue to grow for the next five years due to deficit spending though at least 2022-23.

Budget 2018-19 expects a deficit of $19.4 billion for 2017-18 and forecasts deficits for the next five years, without any timeline to balance the budget. The absence of a timeline to return to balanced budgets is troubling, as it reduces the government’s ability to respond to slower economic growth and possible future shocks. The government’s 2015 election platform originally proposed three years of deficit spending followed by a balanced budget in 2019-20. Three years later, despite strong economic growth, the government is projecting deficits through 2022-23, with no end in sight to the deficit spending.

It is particularly disappointing that these deficits are occurring during a period of economic expansion. Canada’s economy outperformed all G7 countries in 2017. However, many economists note that this expansion is likely late in the cycle.  A prudent approach by the government would ensure fiscal resources are available, through overt policies as well as automatic stabilizers to respond to inevitable slowdowns.

While GVBOT does support deficit spending to make targeted investment in the economy, we believe it is irresponsible to incur such structural deficits without a prudent plan to return to balanced budgets. We have advocated for investment in a number of areas in the past, including Canada’s Pacific Gateway and human capital. We continue to be of the view that spending be prudent and made within the appropriate economic context. Overall, we are disappointed by the lack of fiscal prudence in Budget 2018-19.

For more information, see our President and CEO's Message to Members.