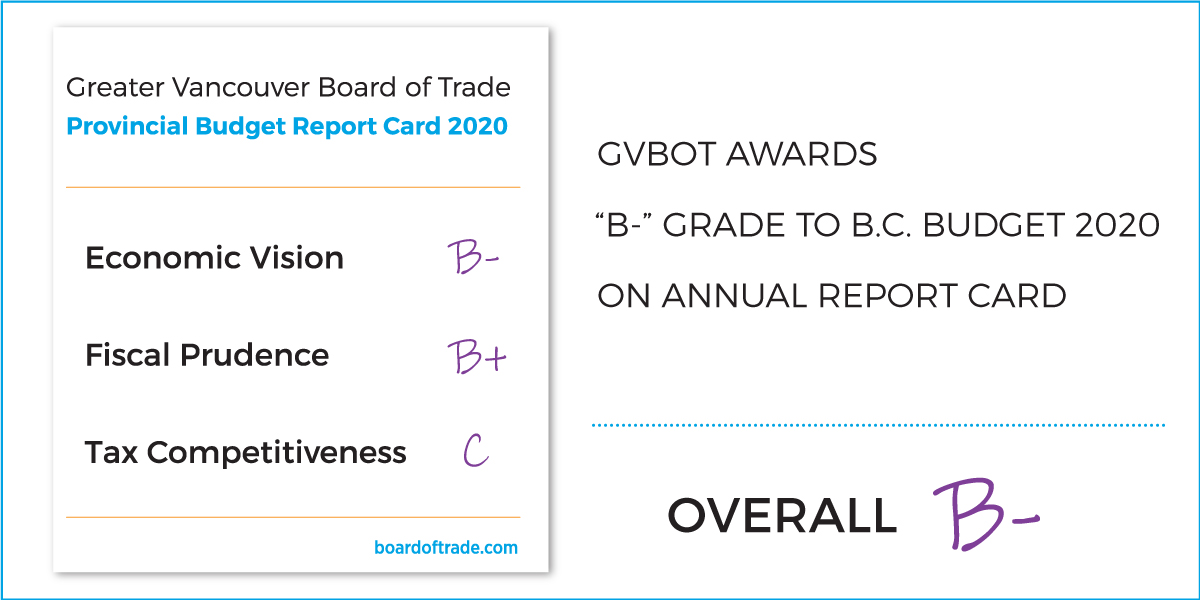 VICTORIA, B.C. —On behalf of thousands of businesses across the Lower Mainland, the Greater Vancouver Board of Trade has given the 2020-21 Provincial Budget an overall grade of B-.

The Chair of the Board of Trade’s Government Budget and Finance Committee and senior GVBOT staff travelled to Victoria today for the provincial budget lockup, where they received an advance copy of the budget and assessed it on three criteria: Economic Vision; Fiscal Prudence; and Tax Competitiveness.

The criteria were outlined in our 2020-21 Pre-Budget Submission to the Province of British Columbia, which can be found on our website at boardoftrade.com/prebudget2020.

“Budget 2020 was predictable in that it stays the course on balanced budgets, investments in child care, and education,” says Bridgitte Anderson, President and CEO of the Greater Vancouver Board of Trade

“Given the cumulative tax increases, the business community is feeling thoroughly tapped out,” noted Anderson. “The budget included another meaningful increase in tax rates that will impact professionals and offered little to no mention of measures to support economic growth and competitiveness,” adds Anderson.

Overall, the budget offered little in the way of providing a vision for job creation and regional competitiveness. There was little to no mention of the contribution small and large business make to support everyday working families and the revenues contributing to social programs.

The government has continued its investment in its Childcare BC initiative. Incremental investments will support creation of additional child care spaces and improvements to facilities. Overall, the budget includes $1.4 billion over the next three years.

Over the next five years, the provincial transportation plan includes $9.2 billion in funding for previously announced projects in Greater Vancouver, including Board of Trade priorities: Broadway subway (to Arbutus), replacement of the Pattullo bridge, and four-laning Highway 1 through Kicking Horse Canyon.

The government is introducing a new BC Access Grant, with an investment of $24 million, which will provide up to $4,000 per year for 40,000 students. The program will be available for students seeking a post-secondary degree, certificate, or diploma. It will be partially funded by redesigning current programming.

British Columbia continues to be in good economic health with growth expected to lead the provinces, due in large part to the LNG Canada project. However, concerns remain regarding growing economic uncertainty here at home and around the world.

The Board of Trade is pleased that the provincial government is delivering a balanced budget for 2020-21, though that has been achieved through higher, previously announced tax increases, reflecting a meaningful shift in the tax burden onto business. Overall, government revenues collected will grow over 8.2% in the next three years and debt is expected to increase by 24% from $70.6 to $87.6 billion by 2022/23.

The province’s taxpayer-supported debt-to-revenue ratio is 84.1% in 2020-21, increasing to 94.4% in 2022-23. While there does appear to be some room for investments in capital infrastructure, there is a need to be cautious to retain B.C.’s enviable credit rating.

As previously announced, the carbon tax will increase on April 1, by $5 per/tonne to $45 per/tonne. The government reinvested some of the additional revenues raised, announcing $419 million over three years in various initiatives including, Go Election BC and charging stations and the Carbon Neutral Capital Program, among other investments.

There were two measures announced that affect the waterfront sector. Effective for the 2021 property tax year, the Port Land Valuation Regulation under the Assessment Act will increase from CPI inflation to CPI inflation plus one percentage point. Additionally, municipal tax rate caps for designated port property under the Act will remain capped at current rates but municipalities will have flexibility to create a new rate for designated port properties when the rate is below the upper tax rate threshold.