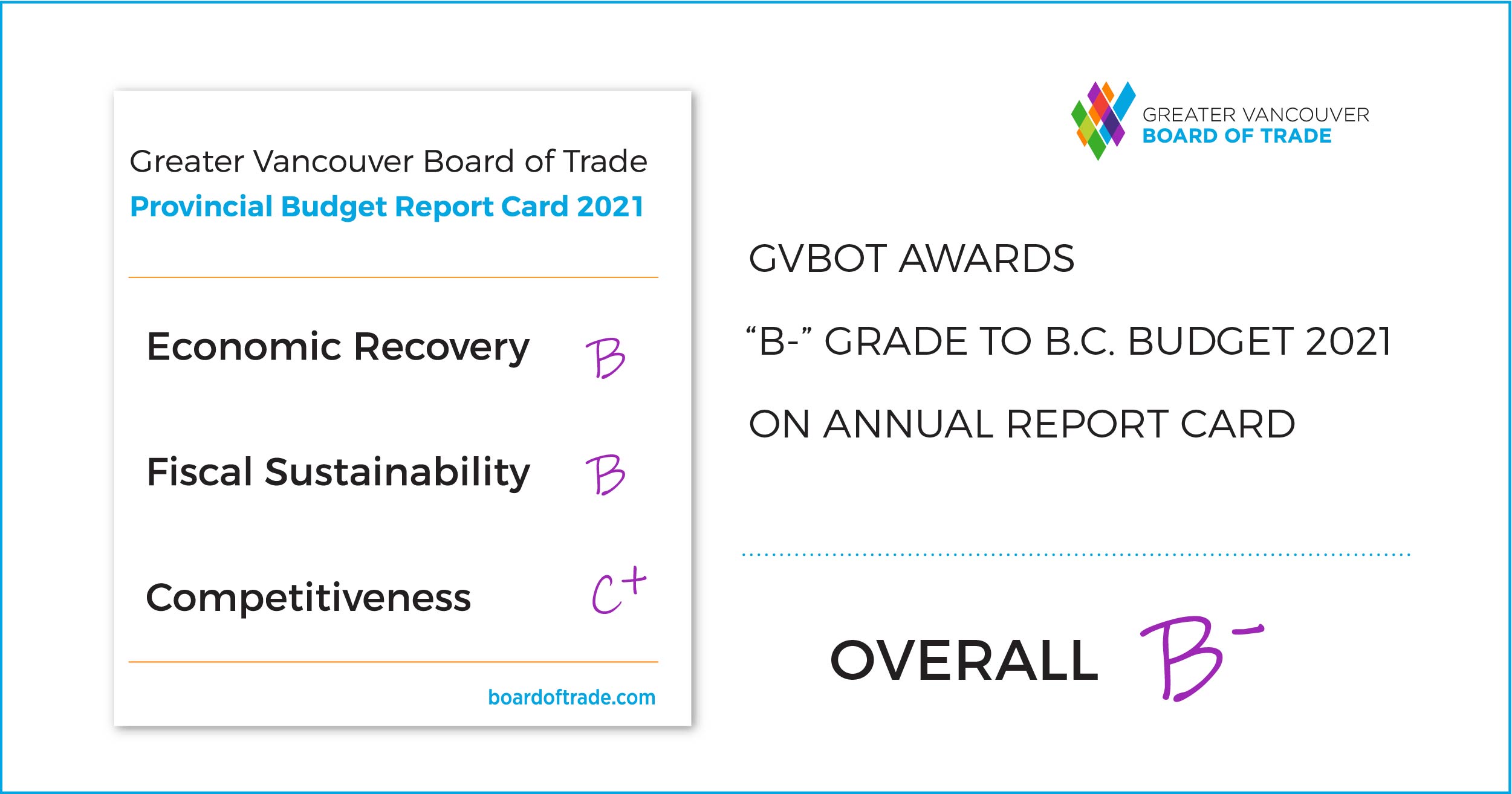 VANCOUVER, B.C. —“This year has been incredibly challenging for everyone and unlike anything we’ve ever experienced. We welcome the continued investment of initiatives announced in the fall to support businesses affected by the pandemic as well as additional support to those affected by recent health orders, including tourism and hospitality,” said Bridgitte Anderson, President and CEO of the Greater Vancouver Board of Trade.

“A solid fiscal footing has allowed B.C. to take on substantial amounts of new debt while remaining “pandemic prudent”, compared to other jurisdictions. There are also significant amounts of unallocated funding that remains available to the government along with an improved economic outlook globally,” said Anderson.

“However, we are still striving for a post-pandemic vision for the economy that attracts investment, creates good jobs and promotes opportunity. It’s not clear this budget puts B.C. on the fast track to thrive in an increasingly competitive world,” said Anderson.

On behalf of thousands of businesses across the Lower Mainland, the Greater Vancouver Board of Trade has given the 2021-22 Provincial Budget an overall grade of B-.

Importantly, the budget also provides additional funding for child care, new supports for workforce training, and continued investments to promote our low-carbon economy through its CleanBC.

“We are pleased to see continued investments in transportation throughout Greater Vancouver as these important projects will create jobs today and form the basis for future prosperity. While there was mention of a new George Massey Crossing, we continue to wait for news from government before the project can move forward,” concluded Anderson.

The Chair of the Board of Trade’s Government Budget and Finance Committee and senior GVBOT staff attended the provincial budget lockup, where they received an advance copy of the budget and assessed it on three criteria: Economic Recovery; Fiscal Sustainability; and Competitiveness.

B.C.’s economy has performed relatively well compared to other provinces in Canada, having recovered pre-pandemic employment levels. However, the unemployment rate across the province remains substantially higher at 6.9% and is higher in Greater Vancouver. Moreover, the private sector continues to lag the public sector in employment recovery. Additionally, many businesses, especially small businesses have taken on substantial amounts of new debt.

Two sectors, tourism and the arts, did receive specific supports. $120 million in 2021/22 from the Pandemic and Recovery Contingencies for further tourism recovery and to support B.C. in remaining a globally competitive destination. The budget also doubled the budget for the Arts Infrastructure Program by providing $6 million over three years to support recovery to arts and culture organizations.

The government has continued its investment in its Childcare BC initiative. Budget 2021 advances the ChildcareBC strategy by investing $233 million more over the fiscal plan to create more new spaces and continue to make child care more affordable. B.C. is well-positioned to take advantage of the federal government’s recently announced investments.

The budget also confirmed previously announced funding of $44 million for digital marketing training and the Launch Online program which has supported thousands of B.C. businesses to create or improve their e-commerce presence.

Like all provinces, British Columbia has taken on substantial amounts of new debt. Overall the budget is “pandemic prudent” and it is likely that B.C. will outperform budgetary projections in growth and revenue.

Debt servicing costs remain low due to low interest rates. The taxpayer-supported interest costs as a percentage of provincial government revenue continues to remain lower than it has been historically, forecast at 3.4% in 2021/22 and 3.6% by 2023/24.

Budget 2021 builds off a host of measures that have increased the cost of doing business, such as the increase to the corporate tax rate, the introduction of the EHT, and other measures. In addition, personal tax increases for professionals, which are now among the highest in the OECD.

A notable exception was the InBC Fund, which was previously announced but was given more detail today. It will invest $500 million over three years to attract and anchor high-growth businesses, talent, and good jobs in B.C.

There was also an additional $100 million set aside for skills training and youth employment initiatives.

Budget 2021 includes $7.6 billion in transportation investments over the next three years. An ambitious and noteworthy capital plan. While there was mention of the George Massey Crossing there appeared to be little in the budget to actually move the project forward. Funding for the full Surrey-Langley SkyTrain is expected but still to come.

We are pleased to see an additional $94 million in Go Electric program rebates for purchases of zero-emissions vehicles, charging stations and supports the commercialization of heavy-duty vehicles

There were few notable taxation measures announced aside from making electric bicycles and tricycles exempt from provincial sales tax.

The government will provide up to $2 billion in low-cost financing to expand the HousingHub program to facilitate the creation of approximately 9,000 units of affordable rental housing.

Continued investment in CleanBC was found in the budget. Included was $60 million to support the Centre for Innovation and Clean Energy and for cleantech investments to expand partnership opportunities with the federal government.