On behalf of 23 organizations and our collective membership, we write to express our dismay with changes your government has proposed to the certification provisions of the Labour Relations Code ("the Code"). These changes will have economic repercussions across the province as businesses work to recover from the impacts of COVID-19. They will also needlessly destabilize the labour relations balance in British Columbia.

It is disappointing that Bill 10 was tabled without adhering to Minister Bains' mandate letter, which directed him "...to engage employer and worker representatives in consideration of any changes proposed to workplace legislation to ensure the widest possible support."1 It is also concerning that your government has proceeded to introduce this legislation outside of the longstanding Section 3 review process which was introduced in the early 1990s. Under changes to the Code your government introduced in 2019, your government must undertake a further Section 3 Review within 5 years. Neither approach was utilized by your government, calling into question your commitment to open and transparent consultation.

Regrettably, this is not the first time that members of the business community have expressed frustration about how consultations are conducted on employment legislation. It is now a pattern that is extremely concerning, especially given your instructions in the Minister's mandate letter to consult widely in advance of making changes to workplace legislation.

In addition to the lack of consultation, we also note that implementation of "card check" (or 'single step certification') goes against the majority recommendation of the 2018 Section 3 Labour Relations Code Panel Review Report, chaired by Michael Fleming.

The secret ballot is a fundamental component of our democratic system and a standard that should apply in workplaces just as it does in other facets of public life. Workers in British Columbia have a right to join a union and our organizations believe in and respect the collective bargaining process. Workers also have the right to make this decision in a manner that is free from influence. The secret ballot is essential to protecting that right.

Our view, expressed to your government in the past, is that the province, employers, organized labour and workers, do not benefit from see-saw labour regimes as government inevitably shifts over time. British Columbia needs labour stability as we turn our attention to recovery from the pandemic.

The Labour Relations Code and the Charter of Rights uphold the right for workers to choose union representation. The Labour Relations Board, as an independent tribunal, is mandated to ensure fairness in the current certification process. While we would not characterize the system as a perfect balance, it is certainly better in its current form than if Bill 10 is enacted. Fundamentally, Bill 10 weakens the democratic rights of workers and undercuts fairness, clarity and certainty for workers and employers alike.

At a time when the government is seeking to create a more inclusive economy, implementing changes as proposed in Bill 10 will foster divisiveness within the workplace at a time when we all need to be focusing on recovery and growing our economy for the benefit of all British Columbians.

We call on the government to withdraw Bill 10 and to undertake proper consultations with stakeholders. 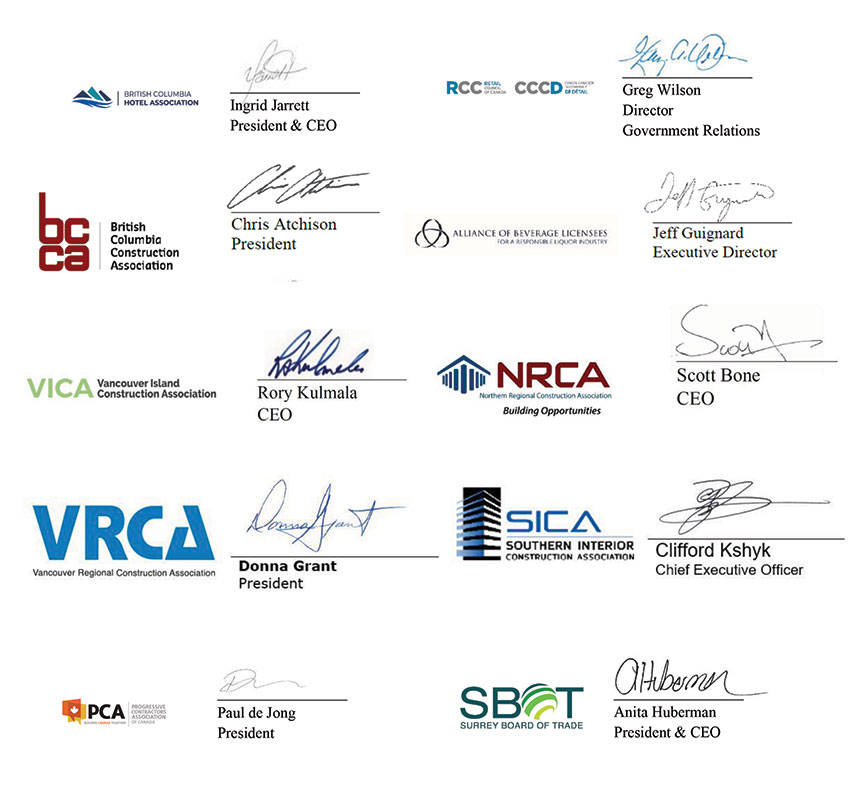