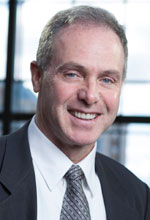 One of the world's largest marine passenger systems, BC Ferries is an iconic brand throughout British Columbia. It owns and operates 36 vessels, 47 terminals and 26 routes, and with its 4500 experienced staff, connects residents, business travellers, visitors, and cargo to their destinations along coastal British Columbia. BC Ferries' safety and operational performance has been recognized with national and international awards.

On December 5th, 2017, join the Greater Vancouver Board of Trade for a presentation and conversation with BC Ferries' CEO Mark Collins. Approaching one year at the helm, Mr. Collins will share information about the company's past and current performance, and talk about his vision to be a future-oriented BC enterprise that is trusted and valued by communities and customers.

Mr. Collins will talk about the ways BC Ferries is moving to more closely align its vision and strategic plan with the aspirations of its customers and the communities it serves.

Mark Collins is a senior marine executive, having held leadership positions with BC Ferries for 11 years before becoming President & CEO. He was BC Ferries' Vice President, Engineering from 2004 - 2012 and Vice President, Strategic Planning & Community Engagement from 2014 - 2017. His 35 years of marine experience also includes serving as President of Rolls Royce Marine Brazil and Rolls Royce Marine Italy, as well as several years in marine engineering on oil tankers, bulk carriers and container vessels. He has a Master of Business Administration in Transport and Logistics from the University of British Columbia, a Bachelor of Arts in Marine Geography from Saint Mary's University and a Diploma of Mechanical (Marine) Engineering from Memorial University of Newfoundland. Born in Newfoundland, Mark understands the importance of a reliable ferry service to people's lives, and to the social and economic health of B.C.'s coastal communities.