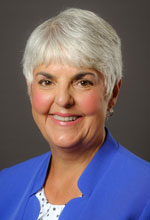 Join the Greater Vancouver Board of Trade for an official address by The Honourable Carole James, Minister of Finance and Deputy Premier of British Columbia, following the tabling of the 2019-20 Provincial Budget.

The presentation will provide Board of Trade Members and our region's business community with an overview of the recently unveiled budget and an update on the state of B.C.'s economy.

Don't miss this opportunity to hear directly from the Province on how the 2019 Budget will impact your business and your family.

Carole James was first elected MLA for Victoria-Beacon Hill in 2005 and served as Official Opposition leader for seven years. She was appointed the Minister of Finance and Deputy Premier in July 2017.

As British Columbia's Minister of Finance, Carole has played a key role in shaping government policy and initiatives, and has overseen one of the strongest economies in Canada. Under her leadership, B.C. has delivered balanced budgets that invest in people and infrastructure, with strong GDP growth and the lowest unemployment rate in the country. As a result, British Columbia has eliminated its operating debt for the first time in 40 years and is the only province with a triple-A credit rating from the 3 major international rating agencies.

A community leader for over 25 years, she was elected to the Greater Victoria School Board from 1990 to 2001 and served as president of the B.C. School Trustees Association for an unprecedented five terms. She has also served at the national level as the vice-president of the Canadian School Boards Association. Following her time as a School Trustee, she served as the Director of Child and Family Services for Carrier Sekani Family Services.

Her experience and dedication to communities is reflected in a number of appointments to provincial initiatives, including the Independent B.C. Budget Review Panel, the Public Education Restructuring Consultation, and the Ministry of Children and Families Secure Care Committee.

Carole is married to Albert Gerow, and is the mother of two children, Alison and Evan, and a proud grandparent to Hayden and Charlie. She was also a foster parent for over 20 years, giving care to children and adults with special needs.