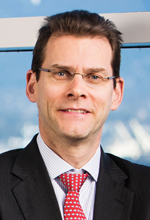 With trade through the port projected to keep growing, and as Metro Vancouver prepares to welcome an anticipated million new inhabitants by 2050, the Vancouver Fraser Port Authority is investing in road and rail improvements, as well as efficiency, environmental and community-oriented programs, to both scale up port capacity to meet Canada's trade needs, but also to support the region's transportation and community needs.

Join Robin Silvester, port authority president and chief executive officer, as he talks about the increasing opportunities Canada's largest port is attracting to the region; the port authority's community-focused approach that considers local needs in tandem with Canada's trade goals; and the barriers to growth that could constrain the port's future, and diminish the benefits this national asset is bringing to our region.

Mr. Silvester was appointed president and chief executive officer of the Vancouver Fraser Port Authority in 2009, bringing to the position extensive international experience in both the port and property sectors. Mr. Silvester spent a significant portion of his career serving in senior roles internationally with P&O Ports. Prior to joining the port authority, Mr. Silvester served as chief executive for the property and facilities management business, United Group Services ANZ in Australia.

Mr. Silvester is a Chartered Engineer, Institute of Corporate Directors, ICD.D, and a graduate of Cambridge University. He completed a corporate finance program at the London Business School. Mr. Silvester is a board member and former chair of the Association of Canadian Port Authorities, an executive member and past chair of the Greater Vancouver Gateway Council, Governor of the Greater Vancouver Board of Trade and past chair of its Policy Council, a director of the Western Transportation Advisory Council, a board member of the Canada West Foundation, a member of the executive committee of the British Columbia Business Council and a past board member of the British Columbia Maritime Employers' Association.