BC Hydro's electrification plan: A clean future powered by water

We want you to be part of the discussion. To participate, go to slido.com and use the password #BCHYDRO

BC Hydro - Our goal is to reduce greenhouse gas emissions in the province by 900,000 tonnes per year by April 2026 – that’s around the same as taking 200,000 gas-powered cars off the road for one year. Our Electrification Plan outlines how we’ll get there. 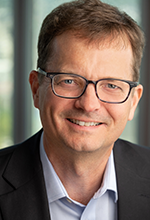 Join Chris O’Riley, President and CEO of BC Hydro, B.C.’s largest Crown corporation, for an overview of their plan to electrify the province.

With a focus on climate change and the electrification of more devices, homes, vehicles and industries, find out how BC Hydro is helping their customers—both current and future—make the switch from fossil fuels to clean electricity powered by water to limit their own impact on climate change.

To ensure a reliable supply of this critical product, BC Hydro is spending approximately $2.9 billion per year over the next 10 years to refurbish and expand its electricity assets. With construction of the Site C Project currently underway, BC Hydro continues to seek opportunities to support clean energy development in B.C., such as through low-carbon electrification.

Chris has held positions throughout the organization and across the province during his 32-year career with BC Hydro, including working with customers, leading operations, overseeing capital projects, and managing risk for BC Hydro's trading subsidiary, Powerex. Chris is a Professional Engineer in electrical engineering and holds a master's degree in Business Administration from the Ivey School of Business at the University of Western Ontario.