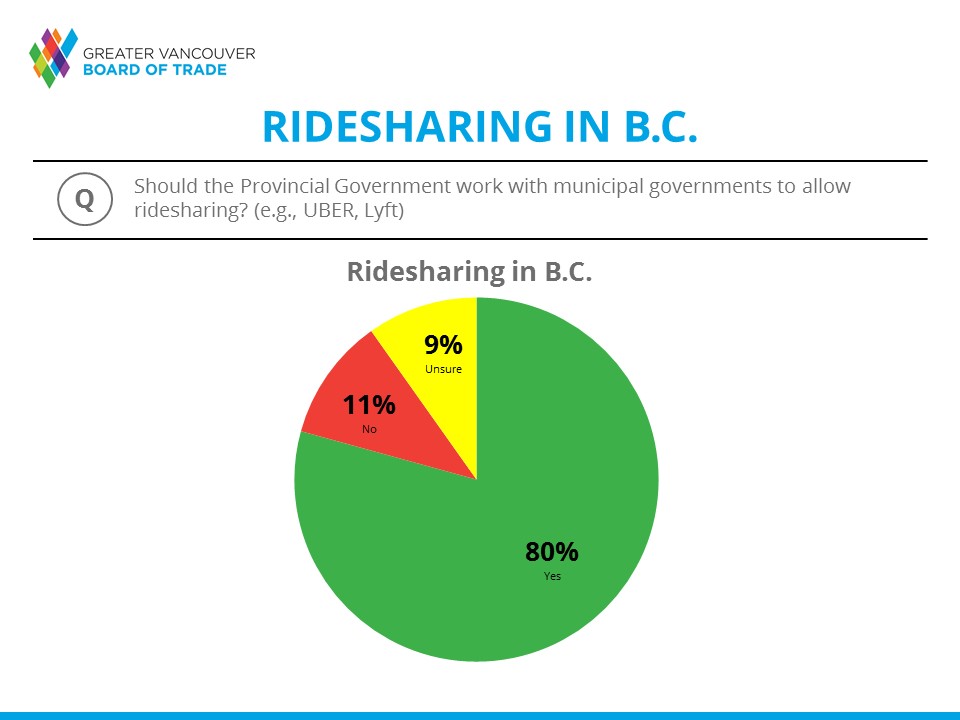 VANCOUVER, B.C. — The Greater Vancouver Board of Trade is once again urging the Provincial Government to make changes to passenger transportation regulations, to allow innovative transportation options such as ridesharing and enhance the competitiveness of the taxi industry.

In response to the Provincial Government’s recently released Ride Sourcing in B.C. stakeholder engagement summary, the Board of Trade is releasing the results of a recent survey of its members. The survey found that 80 per cent of respondents would like to see the government move forward and introduce regulations that would allow ridesharing services, such as Uber and Lyft, to operate in B.C.

“The regional business community has spoken very clearly: they want to see the Provincial Government take action and enable the types of choice and innovative transportation options successfully operating in other jurisdictions," says Iain Black, President and CEO of the Greater Vancouver Board of Trade.

"The Province's recent report highlights the key themes and challenges identified during the Ministry's consultation with stakeholders. The next step is to enable new services and enhance the existing taxi industry, which is operating under regulations that haven’t been materially updated in more than 30 years,” adds Black.

Specifically, the Board of Trade is once again making four recommendations to the Province, which were previously outlined in the February 2016 report Innovative Transportation Options for Metro Vancouver.

The Greater Vancouver Board of Trade’s four recommendations are:

Since the Greater Vancouver Board of Trade released its report in February 2016, many other prominent business groups have formally expressed their support for ridesharing, including the Surrey Board of Trade, BC Chamber of Commerce, and more.

Traffic congestion was also identified as one of the top barriers to our region’s competitiveness in the Greater Vancouver Economic Scorecard 2016, which is likely why so many in the business community are in support of innovative transportation options that promote a car-free lifestyle, in addition to investments in transit infrastructure.

Greater Vancouver is now the largest metropolitan area in North America that doesn’t permit ridesharing services to operate. Ridesharing is now permitted in more than 40 Canadian municipalities, 70 countries, and 400+ cities across the globe.

Next Tuesday, Oct. 11, the Greater Vancouver Board of Trade is hosting David Plouffe, Uber’s Chief Advisor and Former Senior Advisor to President Barack Obama, for a discussion on “The Future of Human-driven Transportation.” The event will give local business leaders an opportunity to hear from one of the world’s leading ridesharing companies — and to ask questions about the rapidly evolving industry.

Plouffe’s keynote to the business community will be open to the media. Full details are online at boardoftrade.com/uber.