Board to honour Michael Audain, Yoshi Karasawa and Whistler Blackcomb at black-tie gala 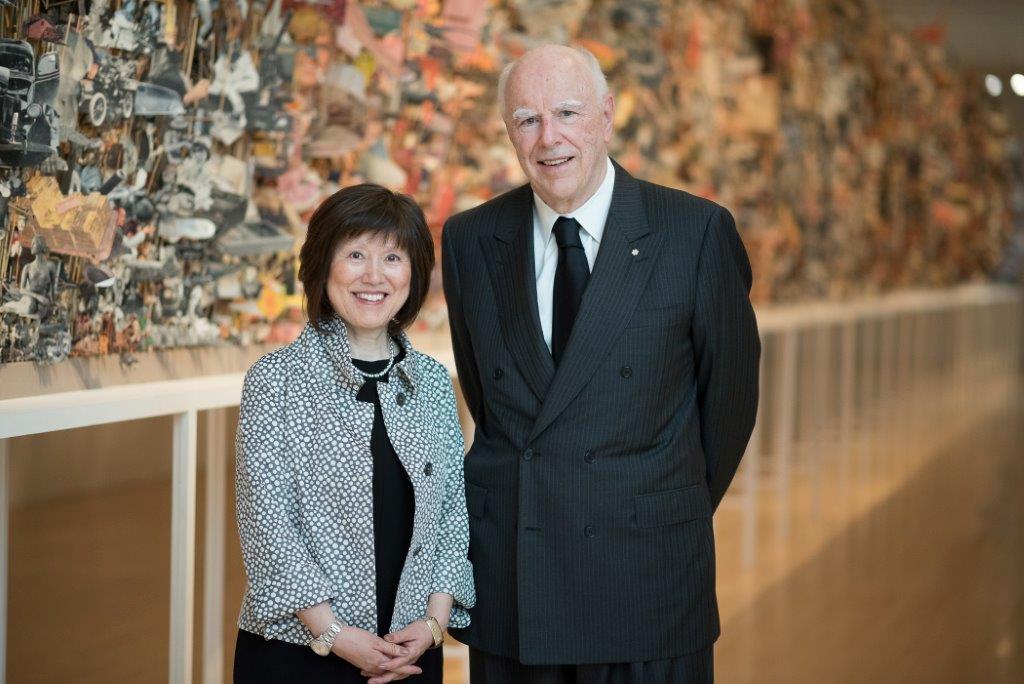 VANCOUVER, B.C. — The Greater Vancouver Board of Trade will celebrate one of B.C.’s most philanthropic couples and one of B.C.’s most beloved outdoor adventure destinations on April 3, 2017, at its 30th Annual Governors’ Banquet and Rix Awards.

For the first time in history, the Rix Award for Engaged Community Citizenship will be presented to a couple, Michael Audain and Yoshi Karasawa, who are renowned throughout the province for their community leadership, generosity, and unparalleled passion for the arts.

Many in the business community recognize the name Michael Audain as the Chairman of Polygon Homes Ltd., which has cemented its reputation as one of the most well-established and highly respected home builders in British Columbia since Audain laid its foundation in 1980.

But Michael Audain’s contributions to our community expand far beyond that. Appointed to the Order of Canada and the Order of British Columbia and the recipient of four honorary degrees, Audain has been a tireless supporter of the arts community, notably serving as Chair of the Vancouver Art Gallery and the National Gallery of Canada. He presently serves as Chair of the Audain Art Museum, the Grizzly Bear Foundation, and the Audain Foundation which was established in 1997 to support the visual arts at major public art galleries and educational institutions.

Yoshiko Karasawa has also contributed her time and expertise throughout the community, particularly on the board of the Vancouver Opera over the past ten years.

The Audain family has donated in excess of $100 million through the Audain Foundation, including significant contributions to the University of Victoria, Presentation House Gallery’s new building fund, Simon Fraser University’s School for the Contemporary Arts, various arts-related endeavours at the University of British Columbia, the National Gallery of Canada, the Gordon Smith Gallery of Canadian Art, the Emily Carr University of Art + Design’s new building fund, the Vancouver Art Gallery, and much more.

Together, Audain and Karasawa have also amassed one of Canada’s most outstanding art collections, including a large group of Northwest Coast First Nations masks and a major collection of Emily Carr’s works. In March 2016, the couple opened the Audain Art Museum in Whistler to share their collection with British Columbians and create a space for temporary exhibitions.

Whistler Blackcomb in the spotlight for its focus on customers, employees, and community

The 2017 Rix Award for Engaged Corporate Citizenship will be presented to Whistler Blackcomb, in recognition of the company’s commitment to excellence for its customers, its efforts to foster a positive work environment for employees, its environmental initiatives, and its dedication to the local community and making Whistler a great place to live and work.

For the last five decades, Whistler Blackcomb has left its mark on those who are drawn to the mountains. What started as an Olympic dream in the 1960s, with the opening of Whistler Mountain in 1966, has evolved into North America’s premier four-season mountain resort and a host venue of the 2010 Olympic and Paralympic Winter Games.

Through the Whistler Blackcomb Foundation, the company has donated over $10 million to non-profit organizations, healthcare and community initiatives throughout the Sea to Sky corridor. The Foundation currently raises and donates approximately $800,000 annually to Sea to Sky communities and invests in one major capital legacy project in the Corridor. Examples of past legacy projects include the Whistler Skate Park, Village of Pemberton Community Centre, Audain Art Museum and the Centrepoint Social Services Building in Squamish

Whistler Blackcomb is committed to reducing the environmental footprint of its operations to zero one day, and believes in an “Every Step Counts” philosophy. Key areas of focus include energy conservation, waste management, and guest and staff awareness and education. The Fitzsimmons Creek Renewable Energy Project, a run-of-river power generating facility between Whistler and Blackcomb Mountains, came online in 2009 and now returns as much power to the grid as is consumed annually by Whistler Blackcomb’s operations.

In recent years, Whistler Blackcomb has been recognized with numerous accolades for its industry-leading approach to the environment and sustainability. The company is also renowned for its staff safety initiatives and employee recognition program. With over 4,000 employees in winter and approximately 1,700 in the summer, Whistler Blackcomb believes that employees that are highly engaged and believe they can make a difference will deliver a great experience. The company’s overall employee engagement score is within the top quartile of companies worldwide as measured by the Global Engagement Score.

The 2017 Rix Awards will be presented at the 30th Annual Governors’ Banquet, to be held April 3 at the Vancouver Convention Centre. This annual gala brings together business, government, and community leaders to induct the Greater Vancouver Board of Trade's immediate past chair into its prestigious Council of Governors. The 2017 inductee is Tim Manning, retired Regional Vice President for RBC Royal Bank.

Tim Manning served as Chair of the Greater Vancouver Board of Trade in 2015-16 — a year in which the organization made headlines by achieving a gender-balanced board of directors, released its milestone report the Greater Vancouver Economic Scorecard 2016, and adopted a new name and regional identity, following a historic vote by its Members.

For more information on the Governors' Banquet, visit boardoftrade.com/GovernorsBanquet.

About the Rix Awards:

The Rix Award for Engaged Community Citizenship is presented to an individual who applies his or her exceptional skills, talents and drive to making a positive impact in society. Hallmark characteristics of community citizenship include trust, purpose, connectedness, leadership, social capital, passion, empathy, ethics, and responsibility. Past recipients include:

The Rix Award for Engaged Corporate Citizenship is presented to an enterprise that demonstrates, both in policy and practice, the highest standards of stewardship towards the long-term well-being of customers, employees, owners, partners, the environment and the broader community. Past recipients include:

Learn more about the past recipients at boardoftrade.com/RixAwards.