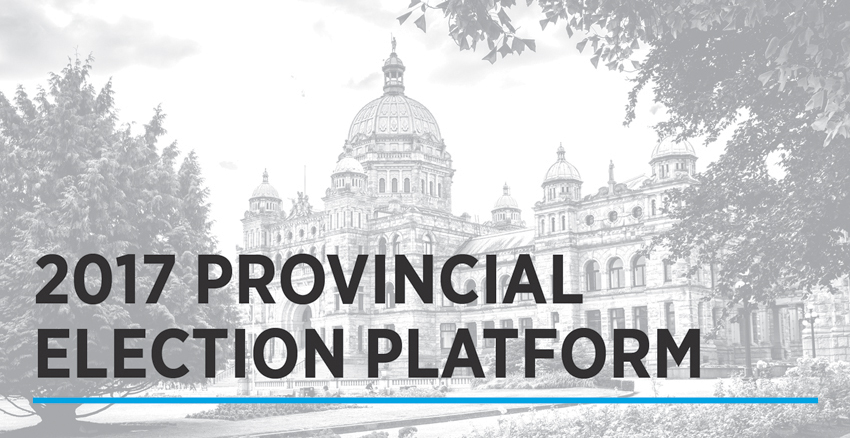 VANCOUVER, B.C. — With less than 100 days until the May 9 B.C. Election, the Greater Vancouver Board of Trade has released its 2017 Provincial Election Platform, a 15-page document that outlines key issues and priorities of the regional business community and makes a series of recommendations to the parties running to form the next Provincial Government.

The Platform, which was developed over the past five months, is based largely on the results of the Greater Vancouver Board of Trade’s Provincial Election Member Survey, conducted in Fall 2016. In that survey, the local business community was polled on a wide swath of issues, ranging from housing affordability and transit and transportation priorities, to energy and natural resource development, PST reform, ridesharing, and more.

“Our organization has a proud 130-year history of evidence-based, non-partisan advocacy on behalf of our region’s business community,” says Iain Black, President and CEO of the Greater Vancouver Board of Trade. “This Election Platform is a reflection of our Membership, which includes more than 5,000 businesses of all sizes, from all industries, across the entire region. By releasing this Platform, we hope to ensure the priorities of our region’s business community are integral part of conversations on the campaign trail leading up to the May 9 election.”

The Platform also draws heavily upon results from the Greater Vancouver Economic Scorecard 2016, an unprecedented research report that the Board of Trade released in May 2016 in partnership with the Conference Board of Canada.

Armed with that research, the Board of Trade has identified four key “Priority Focus Areas” for the 2017 Provincial Election: Transit & Transportation, Human Capital, Business Competitiveness, and Gateway Resources. Within those four broad categories, the Platform identifies specific issues that require attention from the Province. Each section concludes with a set of policy recommendations for the next Provincial Government.

“This Platform is the foundation on which we will be providing commentary throughout the election,” says Black. “As the parties roll out their own policies and platforms in the weeks ahead, we will be assessing their ideas through this lens, to determine whether each party’s vision for the province aligns with the business community and is in the best interest of the Lower Mainland’s economy.”

The Election Platform will be a key part of the dialogue during the Greater Vancouver Board of Trade’s 2017 B.C. Election Series of events, which kicks off this Friday, Feb. 3, with A Conversation with BC Green Party Leader Dr. Andrew Weaver. One week later, on Feb. 10, the Board of Trade will host A Conversation with BC NDP Leader John Horgan. More events will be announced shortly.

“We look forward to engaging with each of the parties vying to form our next Provincial Government, to ensure the best interests of the business community and Greater Vancouver’s economy are at the forefront of this election campaign,” says Black.