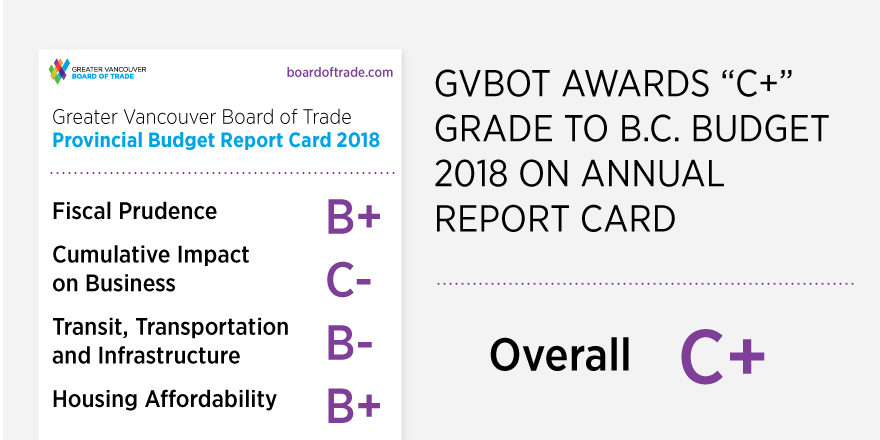 VICTORIA, B.C. — On behalf of thousands of businesses across the Lower Mainland, the Greater Vancouver Board of Trade has given the 2018-19 Provincial Budget an overall grade of "C+."

The Chair of the Board of Trade's Government Budget and Finance Committee and senior GVBOT staff travelled to Victoria today for the provincial budget lockup, where they received an advance copy of the budget and assessed it on four criteria: Fiscal Prudence; Cumulative Impact on Business; Transit, Transportation and Infrastructure; and Housing Affordability. The criteria were prepared for GVBOT's 2018-19 Provincial Budget Priorities document, which can be found on our website here.

"We clearly have mixed views on today's budget," says Iain Black, President and CEO of the Greater Vancouver Board of Trade. "While British Columbia's economy continues to lead Canada, we are concerned that the BC Budget will have a negative impact on our small and midsized business Members."

"We certainly applaud government's efforts on easing the burden of high housing costs and increasing access to child care, but in introducing a payroll tax to offset lost MSP premium revenues this Budget delivers another meaningful blow to small to medium employers, especially in the service and technology sectors," adds Black.

British Columbia is in good economic health, however the Board of Trade notes in this Budget an optimism in government's revenue forecasts (e.g. natural gas royalty revenue up 57.9% in 2018-19). It appears that the Budget is balanced at least in part by optimistic growth and revenue forecasts. With the exception of its (needed) signature initiatives on housing and child care, commitments to new spending are substantial but sprinkled over a number of small and medium-sized commitments.

The Board of Trade is pleased that the provincial government is delivering a balanced budget for 2018-19.  Government is projecting a small surplus of $219 million, which takes account of ICBC's projected loss. It is likely that B.C. will continue to maintain its triple-A credit rating from the rating agencies. Today's Budget also projected that government will deliver two more balanced budgets to 2020-21.

Other than noting the completion of the elimination of PST on electricity, no other PST-related improvements have been announced in Budget 2018-19. The Board of Trade hopes to see a commitment to further steps to make the PST a more competitive tax.

A centerpiece of Budget 2018-19 is an investment of $1 billion over three years for Child Care BC. Benefits of up to $1,250 per month per child will help to improve the Greater Vancouver region's ability to attract human capital.  This has been an area of concern to our Members, and thus we applaud this.

The provincial government is making good on its pledge to eliminate Medical Services Plan premiums as of January 1, 2020. Despite the MSP Task Force not having yet released its report (expected to be released March 31, 2018), government today announced its remedy by introducing an employer payroll health tax.

In doing this, the government will be reducing the tax burden on individuals, by transferring the majority of the $2.6 billion burden onto business.  Because many larger corporations already pay this on behalf of their employees (as a benefit), the incremental impact of this payroll tax will overwhelmingly affect small-midsize businesses the most.  In fact, noting that 50% of the MSP premiums have already been eliminated (with the impact being absorbed in "general revenues"), the new payroll tax collected will more than make up the remaining MSP revenue shortfall, and is a material contributor to achieving the balanced budgets that are forecast.

We also note with concern that the new small business payroll tax comes on top of previously announced minimum wage increase (of 34% over four years), an increase in the general corporate tax rate of 9.1%, a 14% increase to the personal income tax rate of most "skilled professionals", and a previously scheduled increase in the BC carbon tax of 16%, moving up a further $5 to $35 per tonne of GHGs emitted.

Transit, Transportation and Infrastructure: B-

In terms of transit, transportation and infrastructure funding, today's Budget identifies $1.16 billion in investments in 2018-19, and a total of $4.0 billion over three years. This includes $605 million to replace the Pattullo Bridge (less than half of the $1.4 billion price tag for the full replacement cost). For road infrastructure, there is no mention of the Massey Tunnel Replacement Project.

The transit infrastructure line item in the Budget totals $1.1 billion over three years, of which $318 million is allocated in 2018-19. Investments are needed given the importance of moving people and goods efficiently and the significant cost of congestion on our regional economy. Transit and transportation was identified as the top priority of our 5,000+ Members in our 2017 annual survey. We are therefore disappointed to see no mention of rapid transit in Surrey, or the Broadway Corridor in Vancouver. It continues to be important that provincial and regional commitments are made to fully participate in cost-sharing of the Federal Government's Public Transit Infrastructure Fund.

This Budget focuses on housing affordability, which will alleviate some pressure in the Greater Vancouver region. Low housing affordability reduces our region's ability to attract and retain talented, skilled workers, which in turn makes it difficult to grow businesses.

Budget 2018-19 commits $1.6 billion (both operating and capital) to housing investments over three years, including 19,000 affordable units, 5,000 new student housing beds at public post-secondary institutions, and 2,500 supportive housing units.  However, the affordability crisis on the supply side calls for federal participation, and we will be looking to the federal budget on February 27 for its commitments in this area.

We continue to call on the province to encourage civic levels of government to expedite the application, approval and permitting processes.  Moving forward, collaboration between all levels of government will be the key to solving Greater Vancouver's housing affordability challenges.

On the demand side, the Budget increases and expands the foreign buyer tax. The tax increases from 15% to 20% effective February 21, and expands to the Greater Victoria, Nanaimo, Fraser Valley and Central Okanagan.  A speculation tax is also introduced, which will target buyers who do not pay income tax in B.C. (exempting primary residences and long-term rentals). The tax rate will be 0.5 per cent of the taxable assessed value for 2018, and 2 per cent thereafter.

We generally applaud these measures as a needed first step.