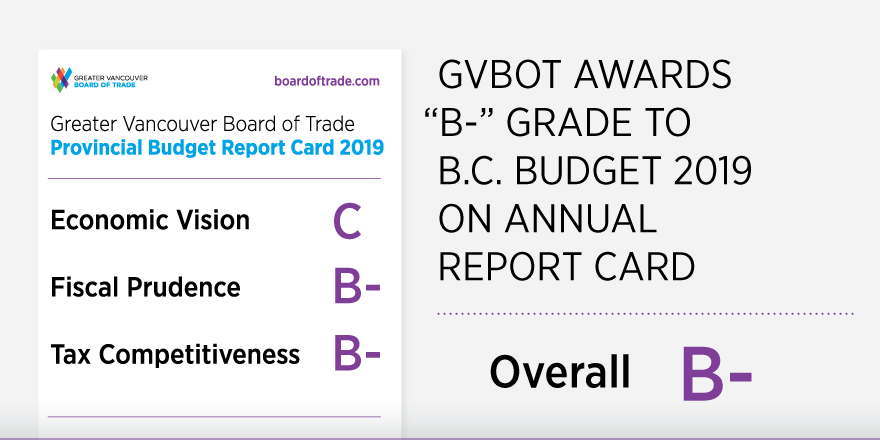 VICTORIA, B.C. — On behalf of thousands of businesses across the Lower Mainland, the Greater Vancouver Board of Trade has given the 2019-20 Provincial Budget an overall grade of "B-."

Iain Black, CEO of the Greater Vancouver Board of Trade and senior GVBOT staff travelled to Victoria today for the provincial budget lockup, where they received an advance copy of the budget and assessed it on three criteria: Economic Vision; Fiscal Prudence; and Tax Competitiveness.

The criteria were outlined in our 2019-20 Pre-Budget Submission to the Province of British Columbia, which can be found on our website at boardoftrade.com/prebudget2019.

"Budget 2019 was a 'steady as we go' budget," says Iain Black, President and CEO of the Greater Vancouver Board of Trade. "However, it is also a budget built and balanced on a series of tax increases made last year that have now started to impact employers."

"There were meaningful investments in child benefits starting in 2020, which will help some families with affordability challenges," Black observed. "Economically, though, we are concerned there were few meaningful announcements with respect to productivity, competitiveness, and economic growth," adds Black.

The budget included substantial investments in child benefits and other very personal aspects of human capital. Specifically, the government announced a new BC Child Opportunity Benefit, which will begin in October 2020. This replaces the Early Childhood Tax Benefit and increases the payments directly to families, based on income.

In addition, the government rolled out its signature program of Budget 2019, CleanBC. It is a $900 million program over three years, that includes an increase of $223 million Climate Action Tax Credit for families, $200 million for energy efficient household upgrades and purchases (including electric vehicle rebates), and $171 million in programs to assist industry in reducing pollution. (Note that $300M of this program has yet to be allocated.)

We were pleased to see specific mention of three of the Board of Trade's long-standing transportation priorities: Broadway subway (to Arbutus), replacement of the Pattullo bridge and four-laning Highway 1 through Kicking Horse Canyon.

That said, we are concerned there were few meaningful announcements with respect to productivity, competitiveness, and economic growth.

British Columbia continues to be in good economic health with growth expected to lead the provinces.

The Board of Trade is pleased that the provincial government is delivering a balanced budget for 2019-20, though that has been achieved through higher, previously announced tax increases, reflecting a meaningful shift in the tax burden onto business.  In addition, this budget contains significant additional spending. Overall, government revenues collected will grow over 10% in the next three years and debt is expected to increase by 21% from $68 to $82 billion by 2021.

Of note, the government also announced today a return to "supplemental estimates", a process by which the province could spend planned surpluses each year. While no information has been given so far, the combination of forecast allowances and planned surpluses equals approximately $800 million per year. We are concerned that this could be directed into additional spending instead of debt reduction or tax relief.

There were no new business taxes introduced in 2019, aside from planned increase to the carbon tax. This was of great relief as 2019 is the year when the cumulative impact of previously announced government tax and fee increases (provincial and federal) will be felt by employers small and large. Provincially, these include increases to corporate and personal income tax rates, the introduction of the Employer Health (payroll) Tax, carbon taxes, meaningful increases to minimum wage and multiple housing taxes.

While not direct taxation, it is notable that both ICBC and BC Hydro are forecast to be either net contributors or revenue neutral to government in the coming years. Given the recent attention to these Crown corporations, we will be watching for rate increases, something that will cost businesses and consumers alike.

As expected, the province adopted federal changes on accelerated depreciation for machinery and equipment and clean energy. Positively, the mining flow-through share and exploration tax credits are now permanent.